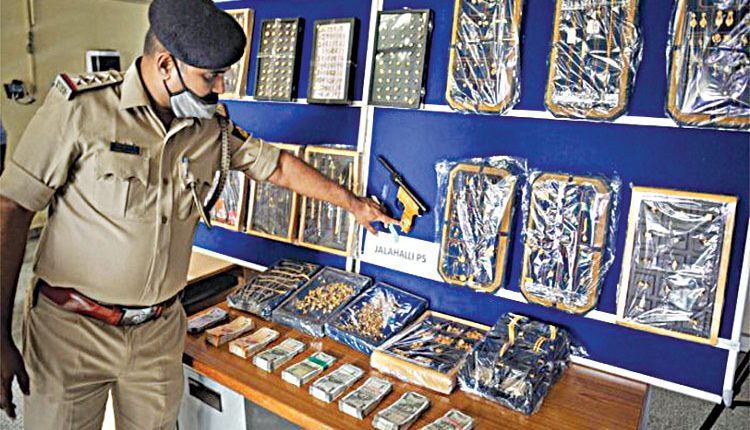 Hyderabad, Jan 17 (Agency) The city police have detected a Pot Market Jewelry shop burglary case within 24 hours by arresting a person. Police recovered 1009.60 grams of Gold ornaments, 209 grams of Silver ornaments, net cash of Rs 50,000, all worth about Rs 39,14,904 from his possession. On credible information, Market Police Secunderabad arrested Mohammad Adil (28), driver of Sansilalpet and recovered stolen gold and silver ornaments, a police release here said on Sunday. Earlier, a complaint was lodged by N Anil Jain (46) proprietor of M/s Anil Jain Pawan Brokers and M Nemichand Jain Jewellers, Pot Market, Secunderabad on January 15 stating that on January 14 at about 1630 hrs, he closed and locked his Pawn Brokers Shop. On the next day at about 1110 hours, his employee Sunil opened the shop and found the wooden drawer was broken and informed the same to him.

Immediately, he went to his shop and found the wooden drawer was broken and the customer’s mortgaged Gold weighing about 1009.60 grams, silver weighing about 209 grams and 50,000 cash total valued Rs. 39,14,904 was missing. He checked the CC Cameras of his shop and found an unknown offender entered into his shop on the intervening night of January 14 and 15 at about 0310 hrs through roof by breaking open the iron grill, went to the ground floor of his shop and committed theft of the above property by breaking open the wooden draw by using an iron instrument and decamped with the booty. He requested the police to take necessary action. During the course of investigation, four Special teams under the charge of Inspector, Market Police Station, Additional Inspectors, Mahankali and Karkhana Police Stations respectively and Inspector North Zone Task Force were formed and with the help of CC Camera footage of the burgled shop, the accused involved in this case has been identified.

Married couple among 3 arrested for burglary in Thane