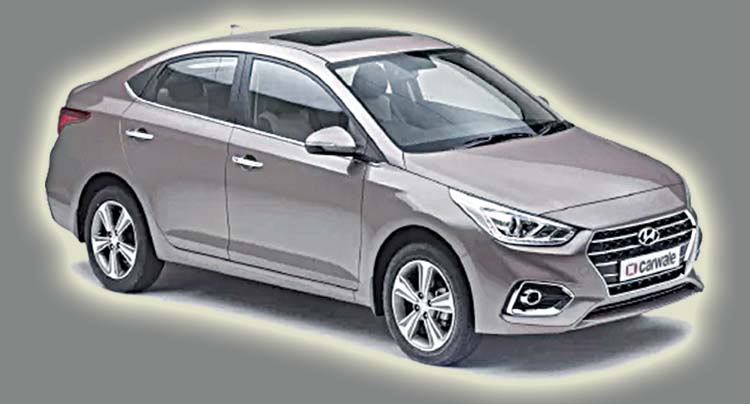 New Delhi, May 13 (Agency) The Hyundai Verna has now become the only midsize sedan to come with wireless Android Auto and Apple CarPlay. The Verna S+ (Rs 9.60-10.81 lakh) and SX (Rs 10.98-13.36 lakh) are now available with the wireless smartphone connectivity features. The carmaker has also discontinued the previously available 1.5 Petrol S trim, with the engine option now available on the higher S+ trim.

As most will know, Hyundai offered Android Auto and Apple CarPlay support across all but the base E variant of the Verna, which does not get a factory fitted infotainment system as standard. The S+ and SX trims came with an 8.0-inch touchscreen unit, while the fully-loaded SX(O) variants received a higher-spec 8.0-inch AVN unit with a HD display that came bundled with its BlueLink connected car tech. In a recent update, Hyundai has now upgraded the infotainment system in the S+ and SX trims to now support wireless Android Auto and Apple CarPlay. The same though doesn’t extend to the fully-loaded SX(O) trims, which still require a wired connection for smartphone integration. Interestingly this isn’t the first mass-market Hyundai to get this feature, with the mid-spec i20 Sportz also offered with wireless Android Auto and Apple CarPlay. There is no change to the remainder of the equipment list of the midsize sedan. The S continues to pack in kit such as dual airbags, ABS, a front USB charger, steel wheels with stylised covers, manual AC, Arkamys sound system, and a cooled glovebox, among others. The SX adds in bits like a wireless phone charger, cruise control, projector headlamps, auto headlamps, alloy wheels, a sunroof, auto dimming rear view mirror, and a rear view camera, to name a few.

Also new to the Verna line-up is a 1.5 petrol S+ variant. The S+ trim was previously only available with the 1.5-litre diesel engine, with the petrol available in a marginally lower-spec S variant. The main point of difference between the two variants is the wheel size, with the S+ getting larger 195/55 R16 units as against the S’ 185/65 R15s. The Verna 1.5 petrol S+ is priced at Rs 9.60 lakh. The engine and gearbox options, too, remain unchanged, with the choice of a 115hp, 1.5-litre naturally aspirated petrol, a 115hp, 1.5-litre turbo-diesel, and a 120hp, 1.0-litre turbo-petrol mill. The 1.5 petrol is available with either a 6-speed manual or CVT unit, while the diesel can be had with either a 6-speed manual or torque converter automatic. The turbo-petrol is available solely with a 7-speed dual-clutch automatic gearbox.

GoAir rebrands as Go First after 15 years of flying

Driving hours for truck drivers of commercial vehicles should be fixed

EPFO adds 14.65 lakh subscribers in July;
■ Nearly half of them first-time job seekers…