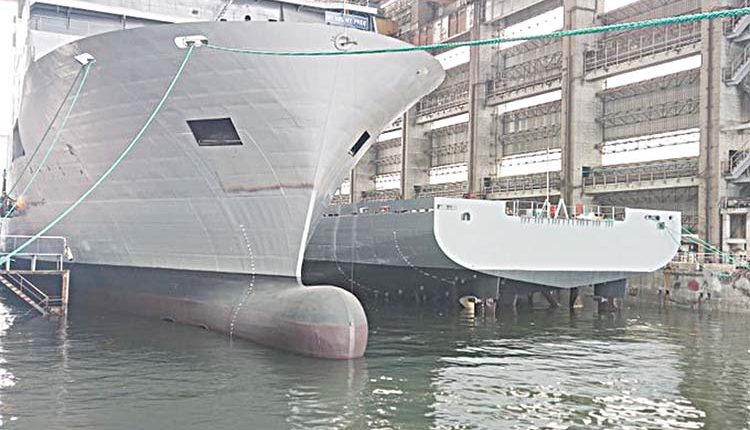 New Delhi, Sep 22 (FN Representative) Chief of Naval Staff (CNS) Admiral R Hari Kumar on Thursday said that commissioning of Two Diving Support Vessels (DSVs)– Nistar and Nipun — will start a new era in the deep ocean diving operation and submarine rescue operations. The ships being built by Hindustan Shipyard Ltd, Visakhapatnam, were launched by Naval Wives Welfare Association (NWWA) President Kala Hari Kumar in presence of Admiral Hari Kumar, who presided the ceremony as Chief Guest. Speaking on the occasion, CNS said this will enhance Indian Navy stature as a credible force, preferred security partner in the Indian Ocean region. He said that the launching of these sophisticated DSVs, first of its kind, is another step towards the Navy becoming 100 percent Atmanirbhar Bharat by 2047. He also stated that the DSV project generated local employment opportunities and promoted indigenisation which will boost India’s economy. Congratulating the HSL and Warship Production Team for a commendable effort in achieving this critical milestone of launching of these two Vessels, he also stated that HSL has become a very trusted and valuable partner in the road to ‘Atmanirbhar bharat’. He also stated that the Indian Navy is looking forward to very close cooperation in building and repairing ships at HSL. He emphasized the need to increase infrastructure and assets of our country in the changing scenario of the world and that economic, political and trade relations between countries are constantly evolving.

In order to achieve the Prime Minister’sVision of ‘SAGAR’ –‘ Security and Growth for all in the region’ and to protect, preserve and promote India’s National Maritime Interests, Indian Navy, Indian Coast Guard and DPSU shipyards have to increase the infrastructure and collaborations that the country stays ahead of the curve in dealing with these challenges, the CNS added. DSVs equipped with an array of complex Diving Support systems and Deep submergence Rescue Vessel (DSRV) will be deployed for deep sea diving and submarine rescue operations. The ships will be capable of conducting Search and Rescue operations and carrying out Helicopter Operations at sea. This project is being executed with support from Indian Industry primarily MSME firms who supplied Yard material, equipment and services. HSL is extensively using the GeM portal for procuring material and services for the project. More than 120 MSME vendors across the country have actively participated in the prestigious project. Speaking on the occasion, HSL Chairman and Managing Hemant Khatri, highlighted that Diving Support Vessel (DSV) is the first of its kind, being indigenously designed and built at HSL, the largest covered dock in Asia, for the Indian Navy.

He thanked the Indian Navy team for extending their support in achieving this milestone and stated that this event marks the capability of HSL to deliver potent platforms for the Nation. He also highlighted that the shipyard has achieved a milestone of completing the construction of 200 ships and repair of 2000 ships during this year and with significant reforms achieved the highest ever turnover of Rs 755 crore and Net Profit of Rs 51 crore for FY 2021-22. He also brought out that HSL has vast potential to secure high value construction and refit orders and meet the future requirements of Indian Navy, Coast Guard, SCI and DCI thus propelling the ‘Atmanirbhar Bharat’ initiative of the Government of India. There were thunderous cheers from jubilant gathering as the ships embraced the welcoming waters of Bay of Bengal.