Govt provides free ration to 55 cr people in May 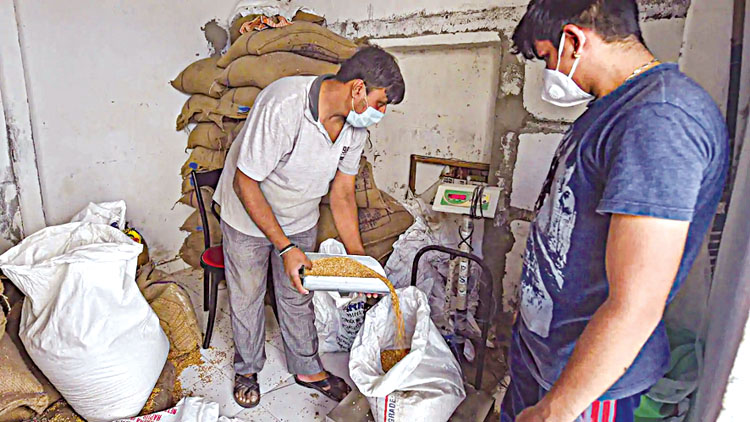 New Delhi, Jun 3 (Mayank Nigam) The government on Thursday said it has provided 28 lakh tonne foodgrains free of cost to about 55 crore beneficiaries in May through ration shops under a scheme to provide relief to the people during the second wave of the COVID-19 pandemic. Also, about 1.3 lakh tonne of wheat and rice have been provided to 2.6 crore beneficiaries so far in June under the Pradhan Mantri Garib Kalyan Anna Yojana.

The information was provided by Food Secretary Sudhanshu Pandey at a media briefing. Elaborating on the implementation of the PMGKAY scheme, he said more than 63.67 lakh tonne foodgrains (around 80 per cent of total PMGKAY allocation for May and June 2021) have been lifted by states and UTs from FCI (Food Corporation of India) depot so far. Under the PMGKAY, the Centre is distributing free foodgrains for two months (May-June 2021). It is providing 5kg per person per month to approximately 79.39 crore beneficiaries covered under the National Food Security Act (NFSA).

Given the potential of the ONORC plan to ensure the access to NFSA foodgrains to migrant beneficiaries during the COVID-19 crisis, the food ministry ‘has been continuously pursuing with States/ UTs through video conference meetings/advisories/ letters etc to implement the programme to its full potential by proactively reaching out to the migrant beneficiaries, said an official release. Pandey also said ONORC has already been implemented in 32 states and UTs. He expects that the remaining four states and UTs — Assam, Chhattisgarh, West Bengal and Delhi — too would be implementing the scheme in the next few months. Bihar, Rajashtan and Andhra Pradesh are the top-performing states in ONORC transactions.

India will help create global capabilities to deal with pandemic