Yogi rings bell at BSE as LMC bonds are listed 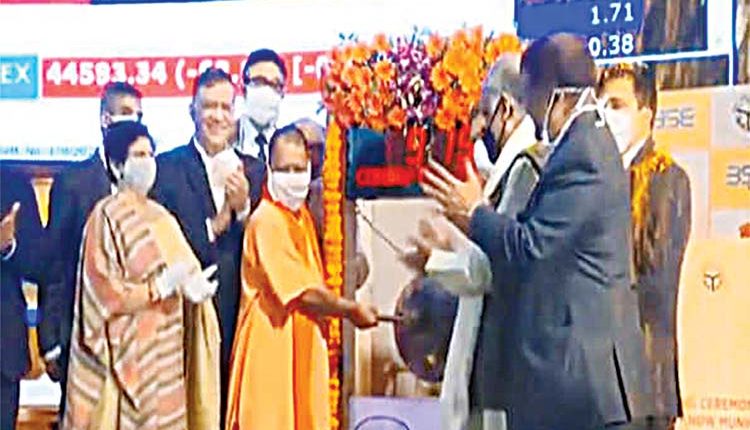 Mumbai/Lucknow, Dec 2(Bureau) In a historic first for North India, bonds of the Lucknow Municipal Corporation (LMC) got listed on the Bombay Stock Exchange(BSE) in the presence of Uttar Pradesh Chief Minister Yogi Adityanath on Wednesday. Making it memorable occasion, CM Yogi participated in the traditional ‘ringing bell ceremony’ to release the bond at the Heritage Hall of BSE today and described the listing of the bond as “the start of a new era” in the history of the state. He said that the listing of Rs 200 crores Municipal Bond is a step ahead for UP on the path of ‘self-reliance’.

“Uttar Pradesh will play a pivotal role in fulfilling the commitment of Prime Minister of Atmanirbhar Bharat,” the CM stated. Sounding elated, the UP CM said that the ranking of the bond manifests the faith of investors, entrepreneurs, and the industry in the policies of Uttar Pradesh. “Besides providing basic infrastructure facilities to the people of the state and ensuring the development, the state has achieved second rank in ‘Ease of Doing Business’, making a massive jump over the past years,” CM stated while pointing out that the biggest state of the country in terms of population and the third biggest economy of the country is taking giant strides towards industrialization and making value addition of its people. The Hob’l CM stated, “This step is important to change the fundamental work culture of Municipal corporations in the state and will help not only Lucknow in augmenting infrastructural facilities and funding but also motivate other corporations. To work in such a direction, Ghaziabad Municipal corporation will soon list its bonds in BSE,” the CM said in the presence of entrepreneurs, investors, and BSE officials. Speaking on this momentous occasion, the CM further added, “It is a matter of pride for UP that the Lucknow Municipal Corporation has raised Rs 200 crores through its bond issue which got listed on BSE today. It is the trust of the investors which UP has earned during the last three and a half years of governance. This will augment our efforts to improve infrastructure in urban areas and it shows the improvement in the Industrial climate of the state and the trust the investors have reposed in the state machinery. ”

LMC bonds received 21 bids on BSEBOND platform for Rs.450 crores, 4.5 times of the issue size. The corporation received bids for an Issue size of Rs 200 Cr within 60 seconds of the issue opening, which opened for subscription on November 13 last. LMC now becomes the eight city in India to have capitalized on the new guidelines to fund the AMRUT and Smart Cities Mission to raise an aggregate of Rs 3690 crores as per Govt released data. The capital raised is proposed to partially fund the AMRUT projects and other infrastructure projects which had an earmarked requirement of Rs 3,10.95 crores. The AA Stable and AA(CE) Stable rated bonds by India and Brickwork Ratings have a tenure of 10 years and state that the principal amount will be paid in seven installments from the forth and tenth year. The coupon rate of the taxable bond was fixed at 8.5% per annum. The actual cost of borrowing will be approx. 7.25% after considering Rs 26 Cr incentive from Government of India for raising Municipal Bonds.

On the occasion of the listing of the bonds, MD & CEO of BSE Ashish Kumar Chauhan stated “I would like to congratulate Lucknow Municipal Corporation for successfully raising Rs. 200 Crores by issuing Municipal Bond on BSE Bond platform. The order book was filled more than double in a matter of few minutes which establishes Lucknow Municipal Corporation as a credible entity in the Indian bond market.” The Chief Minister also said that his government has been encouraging the MSME units of the state for listing in National Stock Exchange (NSE) and Bombay Stock Ex change(BSE), so far 15 units have taken steps to meet their financial needs by listing on BSE. “The policies of the Uttar Pradesh government are investment-oriented. We are constantly striving for simplicity and ease for investors. In recent times, due to the single window system, the needs and expectations of investors are being suitably addressed,” he added. He said, “the state has received unprecedented support from the industry at the Uttar Pradesh Investor Summit and this effort will continue. Now a defence corridor is being established in UP, which will be important in making the country a global hub in the field of defense manufacturing.”

UP govt hikes sugarcane SAP by Rs 25 per quintal; Interest on pending power bills of…