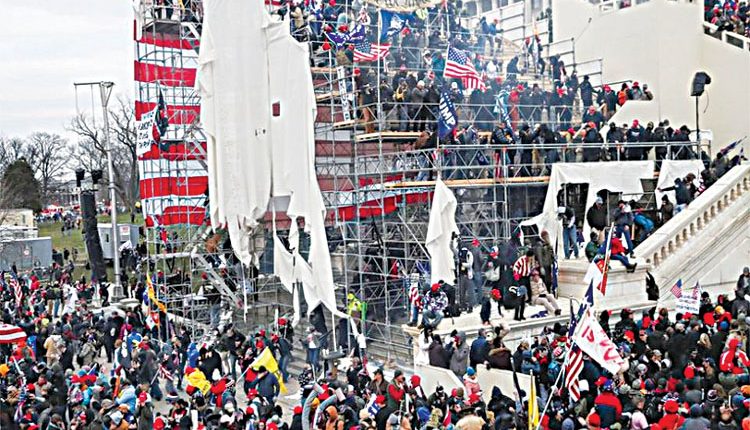 Washington, Jan 7 (Agency) The world watched in shock and horror yesterday when Donald Trump supporters stormed the Capitol building in an attempt to stop Congress verifying the democratic election of Joe Biden – incited by the president himself. Four people died in the incident: one shot by police and three in “medical emergencies”. The mob smashed windows, looted artefacts and occupied offices, in what Biden described as a “siege” and an attack on democracy. The vice-president, Mike Pence, and members of Congress were evacuated for their safety, while staffers hid under desks and barricaded doors. Pipe bombs were recovered outside Democratic and Republican HQs.

The mob attack was directly incited by Trump, who urged a crowd of protesters to march on the Capitol and reject his election defeat. After much pressure to act, the the president made a feeble attempt to halt the violence, releasing a video message in which he again peddled baseless claims of voter fraud and told the mob “we love you”. Ed Pilkington looks at the history of Trump’s implicit condoning of rightwing violence and extremism, and how the last four years built up to Wednesday. But questions were also raised about the conduct of Capitol police, and how protesters could conduct an enormous security breach with relative ease. The last breach of the Capitol was more than 200 years ago, and despite the size of the mob there were just 52 arrests. The relatively slim police presence also stands in stark contrast to the security during Black Lives Matter demonstrations last year, when more than 5,000 officers were deployed around the Capitol compared with 115 on duty at any one time on Wednesday.

The events, which were condemned by astounded leaders around the world, led Twitter and Facebook to take unprecedented action, locking Trump out of his accounts and removing several posts. It took four hours for officials to declare the Capitol “secure”, and Congress resumed to certify the election results, successfully confirming Joe Biden’s presidency in the early hours of this morning. Many senators appeared to withdraw planned objections to the election outcome as a result of the day’s events.

US sees record hospitalisations due to COVID as vaccinations lag