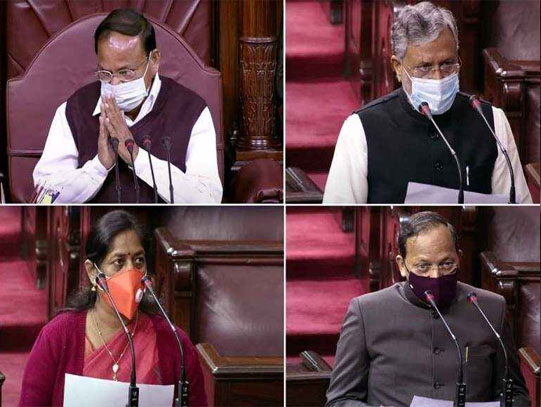 New Delhi, Dec 13 (Agency) The three newly elected Rajya Sabha Members on Saturday took oath or affirmation in the Upper House in presence of chairperson M Venkaiah Naidu. The three Members – Sushil Kumar Modi from Bihar, Ms Seema and Mr Arun Singh who has been re-elected from Uttar Prdesh, took oath in Hindi, affirming the allegiance to the Constitution of India. Accept Mr Arun Singh, rest two members have elected for the first time to the Rajya Sabha.

Welcoming the new Members in Upper House, Mr Naidu advised them to go through and study the various publication of the Rajya Sabha so that they can understand the procedure and working of the this august House. He also said that they can seek help from the Rajya Sabha Secretariat and the publication “the Rajya Sabha at Work” and they should also go through the debates of the Constituent Assembly as well as the speeches of the prominent leaders of this House on various issues. Mr Naidu also advised him to follow the discipline of the House and maintain the decorum of the House.

Mr Thaawarchand Gehlot, Leader of the House, Deputy Chairman Harivansh, Mr Arjun Ram Meghwal, Minister of State for Parliamentary Affairs were also present on the occasion. Later, speaking to the media, Mr Arun Singh said that he was grateful to the Prime Minister Narendra Modi, Home Minister Amit Shah and BJP president JP Nadda for giving second term to the Rajya Sabha and he will be honestly discharging his duties as Member of the House and for the development of the Uttar Pradesh. Expressing his gratitude to the BJP central leadership and PM Modi, Amit Shah and party president, Mr Sushil Modi said that because of the them he had an opportunity to work in both Houses of Bihar Assembly and now at the Upper House. He said that while remaining at the centre he will keep on working for the development of Bihar as well. Ms Seema, a three termed former MLA from Uttar Pradesh, said that she has been assigned a great responsibility from the Party and she will also endeavour to work for the nation as well as for her state. She also thanked her party leadership.