Tagore was proud of Bengal, he was equally proud of India’s diversity 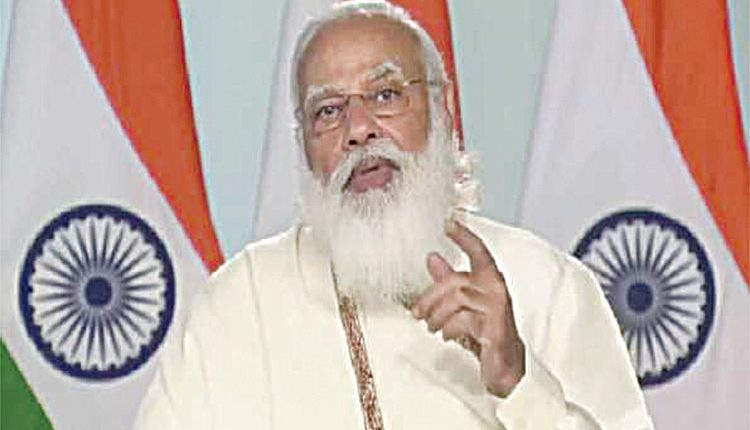 Shantiniketan, Feb 19 (FN Agency) Prime Minister Narendra Modi on Friday said Gurudev Ravindra Nath Tagore was proud of Bengal, he was equally proud of India’s diversity. Mr Modi addressed the Convocation Ceremony of Visva-Bharati University today through a video conference. Governor of West Bengal and Rector of Visva-Bharati Jagdeep Dhankhar, Union Education Minister Dr Ramesh Pokhriyal Nishank and Union MoS for Education Sanjay Dhotre were also present on the occasion. Addressing the convocation he quoted the poem of Tagore on Veer Shivaji which inspired him and called for unity of India. The PM stressed that the students and the faculty were not just a part of a university, but also bearers of a vibrant tradition. He said Gurudev named the University Visva Bharati meaning Global University since he expected that anyone who comes to learn in Visva Bharati will see the whole world from the point of view of India and Indianness.

So he made Visva Bharati such a place to learn, which can be seen in the rich heritage of India. He gave a call for assimilating and researching about the Indian heritage and working towards solving the problems of the poorest of the poor. He said Visva Bharati for Gurudev Tagore was not just a knowledge imparting institution but an attempt to reach the topmost goal of Indian culture, which is to achieve oneself. The Prime Minister said Gurudev believed that we have to discover ourselves among the varied Ideologies and differences. PM said that Tagore used to be proud of Bengal but at the same time, he was equally proud of India’s diversity. And it was due to Gurudev’s vision that humanity thrives under the open sky of Santiniketan. He praised Visva Bharati as an unending sea of knowledge in itself, the foundation of which was laid for experience-based education. He said there is no limit to creativity and knowledge. It was with this thought that Gurudev founded this great university. The PM urged the students to always remember that knowledge, thought and skill is not static but a dynamic and continuous process. He said responsibility comes with knowledge and power. Just as one has to be restrained and sensitive while in power, every scholar also has to be responsible for those who do not know.

The Prime Minister, while addressing the students said Your knowledge is not only yours but society’s and is the heritage of the country. Your knowledge and skill can make a nation proud or can push society into the darkness of slander and ruin. He said many who are spreading terror and violence across the world are highly educated, highly skilled. On the other hand, some people are risking their lives and stationed at hospitals and labs to save people from a pandemic like COVID.