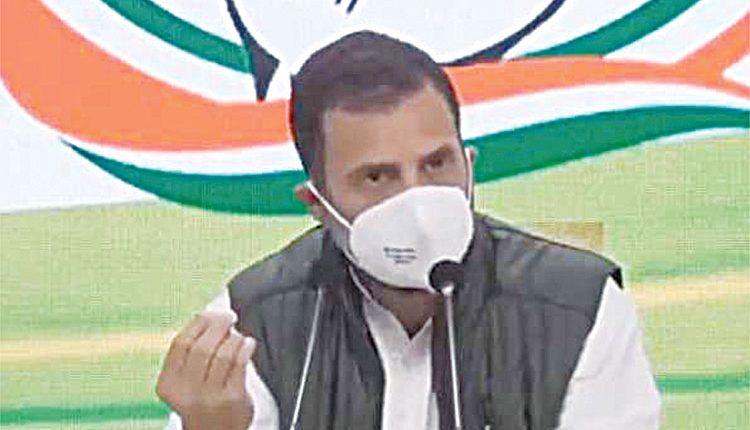 New Delhi, Feb 3 (Agency) Congress leader Rahul Gandhi on Wednesday asked Prime Minister Narendra Modi to resolve the farmers’ issues and not to ‘sell the country to one per cent of population (corporates).’ Addressing a press conference, Mr Gandhi said, ‘My constant request to the Prime Minister is ‘do your job’. Your job is not to sell this country to one per cent of the population, your job is to protect the ‘kisaan’ (farmers) who are standing outside (Delhi).

Go hold their hand, give them a hug and tell them ‘what is it that I can do for you’. ‘The farmers won’t retreat. The government will have to retreat and the sooner the better,” he said. Mr Gandhi charged the government with helping one per cent (corporate) of the population through the Union Budget. On Republic Day violence, he said Union Home Minister Amit Shah should explain how some people stormed the Red Fort on Republic Day as Delhi Police, which were responsible for law and order situation, comes under its ambit. Alleging that the country is lacking leadership, former Congress president said, “There is no understanding, no strategy, media is controlled and reality of what is going around is not coming to the fore.’ ‘Maya (illusion) is going to break, somebody is going to break it,’ he said. The Congress leader said, ‘The Prime Minister has basically given up, he is now on a different plane.

We are going somewhere else now and the country is not being run. It is my request to the Prime Minister that please gather up your courage and run the country,” he said. Mr Gandhi said that India’s image at the international level has taken a beating because of the way ‘the government was treating farmers and its own people by fortifying Delhi.’ The Gandhi scion said, ‘Indian reputation has taken a hit not only for how we are treating our farmers, but also how we treat journalists. Our biggest strength, our soft power, has been shattered by the BJP and RSS, and their mindset.’

Criticising the Union Budget, Wayanad MP said, ‘I see India is a dangerous situation. The world is in a flux. We have an aggressive China on the border.’ On Chinese incursions at the LAC, former Congress president asked, ‘What message are you giving to China, that you will not raise defence expenditure? What would the pilots and soldiers be thinking that they are facing a crisis and the government won’t give them money?