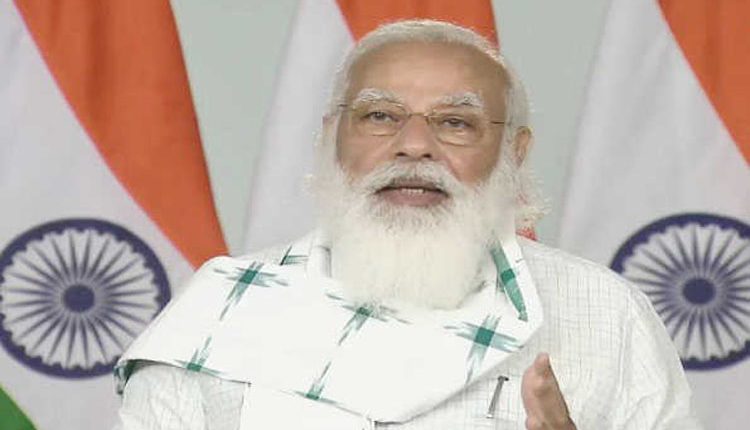 New Delhi, Mar 7 (Agency) Describing people of the country as his family and their ailments are ailments of his family members, Prime Minister Narendra Modi on Sunday urged the countrymen to buy affordable medicines from Janaushadhi Kendras. Dedicating to the nation the 7500th Janaushadhi Kendra at North Eastern Indira Gandhi Regional Institute of Health and Medical Sciences (NEIGRIHMS), Shillong, he said that that the Janaushadhi Yojana is becoming a big friend of poor and middle-class families besides becoming the medium of both service and employment.

“The scheme is providing affordable medications to people in hilly areas, Northeast and tribal areas, the dedication of 7500th center is important as there were not even 100 centers in India six years ago and now poor and middle-class families are saving about Rs 3600 crore every year on expensive medicines”, Mr Modi said. Asking the Ministry concerned to achieve the target of 10000 such centers, he said that the scheme has been promoting Aatamnirbharta among women as more than 1000 centers are being run by the women. The Prime Minister remarked that to promote the scheme, the incentive has been enhanced from 2.5 lakh to 5 lakh with an additional incentive of 2 lakh for Dalit, Adivasi women, and people of the Northeast.

Speaking on the occasion, the Prime Minister also noted that the demand for India-made medicines and surgery has increased and production has been also increasing to keep up with the increasing demand. The Prime Minister interacted with beneficiaries, Kendra Sanchalak, Jan Aushadhi Mitras at five locations Shimla, Bhopal, Ahmedabad, Maruthi Nagar in Diu, and Mangalore, and praised the youth promoting the Janaushadhi movement and asked them to help in the ongoing vaccine drive. He said Ayushman Yojana has ensured free treatment up to Rs 5 lakh, for the country’s more than 50 crore poor families. So far more than 1.5 crore people have taken advantage of it and saved about Rs 30000 crore. The Prime Minister lauded the scientist for the Made in India Corona vaccine and said “Today India has vaccines not only for local use but also for helping the world and the vaccination has been kept free in the government hospitals while the private hospitals have been capped to charge Rs 250 which is the lowest in the world”.

Talking about the health infrastructure in the country, Mr Modi stressed the need for having infrastructure for effective treatment and availability of quality medical staff and also recounted the Government’s efforts to improve medical setup in the last six years. He informed that in the last six years more than 30 thousand seats have been added to 55 thousand MBBS seats that existed in 2014. “There were 30 thousand PG seats, to which, 24 thousand new seats have been added. 180 new medical colleges have been established in the last six years. 1.5 lakh Health and Wellness centers have been established in villages, 50 thousand of which have already started functioning. These centers are treating serious ailments and making sophisticated tests available locally”, Mr Modi added.