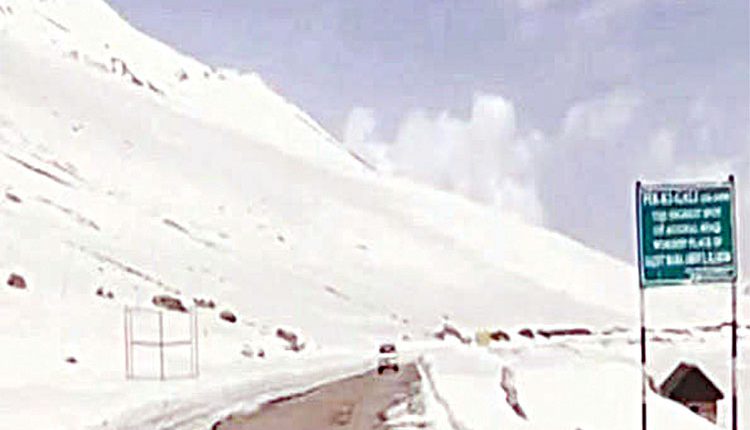 Srinagar, Nov 30 (Agency) Traffic remained suspended on the historic 86-km-long Mughal road for the 8th consecutive day on Monday due to accumulation of snow and slippery road conditions, a traffic police official said this afternoon. Only one way traffic is allowed from Srinagar to Jammu on the highway, connecting Kashmir valley with the rest of the country, he told UNI today. He said the Mughal road, connecting Shopian in south Kashmir with Rajouri and Poonch in Jammu region remained closed due to accumulation of snow since November 23. Though the snow clearance operation was immediately started, but continued snowfall on Tuesday and Wednesday besides sub zero temperature, the road at several places, including Dubjan and Pir-ki-Gali has become very slippery. The road, being considered alternative to Srinagar-Jammu national highway was mainly used to transport fresh fruit to different mandis across the country from Kashmir valley this summer. The government has sanctioned a tunnel to make it all weather road which remained closed due to heavy snowfall during winter months.

Official said that Srinagar-Jammu national highway was through for traffic and only down convoy was allowed today. However, he said passengers travelling in Light Motor Vehicles (LMVs) were advised to cross Zig Qazigund, gateway of Kashmir, between 0700 hrs to 1200 hrs. No vehicle will be allowed after cut off timing, he said adding the commuters are advised to follow Standard Operating Procedure (SOP) issued by the government to prevent spread of COVID-19. Jammu bound Heavy Motor Vehicles (HMVs) and load carriers will also be allowed to ply from Zig Qazigund, he said adding Traffic Control Unit (TCU) at Ramban will coordinate of release of oil tankers and fresh perishable carriers from opposite direction. Security forces are also advised not to ply against the traffic advisory, he said adding they may also ply from Srinagar to Jammu.