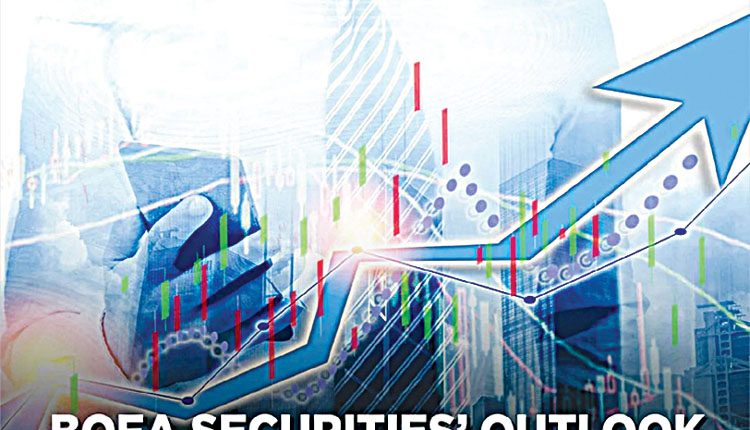 Mumbai, Jan 20 (Agency) After the strong rally since April, there is a limited upside in Indian equities and the markets will end 2021 with a low single digit gain, an American brokerage said on Wednesday. Bofa Securities said it is “not as bullish” and gave a target of 15,000 points for the 50-share benchmark Nifty by the end of the newly started year. Markets have rallied by 80 per cent since April after a heavy 40 per cent correction following the announcement of the COVID-19-related restrictions. Many analysts, including RBI Governor Shaktikanta Das, have raised concerns over the over-heating in the markets.

The benchmark Nifty was trading 0.6 per cent up at 14,607 points at 1259 hrs on Wednesday. “We are giving a target of 15,000 on the Nifty, which means there is a limited upside now. We are still bullish, but not as bullish,” its India equity strategist Amish Shah told reporters. He mentioned the strong rally witnessed by the markets in the immediate past for its more conservative view on the markets. The brokerage is overweight on sectors including financials, metals and steel, and industrial, he said, adding that information technology, energy, consumer discretionary and auto are the sectors on which it is underweight. Within the financial sector, Shah said the brokerage feels the banks are adequately provided for the possible asset quality reverses and called the prediction of a jump in the dud assets by RBI in its biannual Financial Stability Report as conservative.

He said the valuations of banking and financial companies are also lower from the historical highs which make it an attractive bet, and added that there is also a chance of higher credit growth fueling earnings for select lenders which will make it an attractive bet. On the metals and steel and industrials sectors, the call is driven more from a likely surge in capital expenditure from the government, real estate and infrastructure sectors which we should be seeing, he said. The upcoming budget will have an expansionist bias in the fiscal policy while the inventory levels will dip in the realty sector, leading to a surge in new projects, he said. Shah, however, said that a full private sector capital expenditure cycle recovery is still two years away and it will be select sectors which will be seeing a growth in investments in 2021. The target on the benchmarks also assumes a net addition of USD 10 billion to the foreign portfolio flows into the country, over and above the USD 22 billion in 2020, he said.

The foreign flows will continue on the back of stimulus measures and easy monetary policies in the developed world, he said, adding that Joe Biden will continue with such measures in the US on taking charge. Shah also said that the government will continue on its reforms agenda in the new year as well and specifically pointed out power sector where there can be greater private sector play in distribution.

Biden promises to be president to all Americans