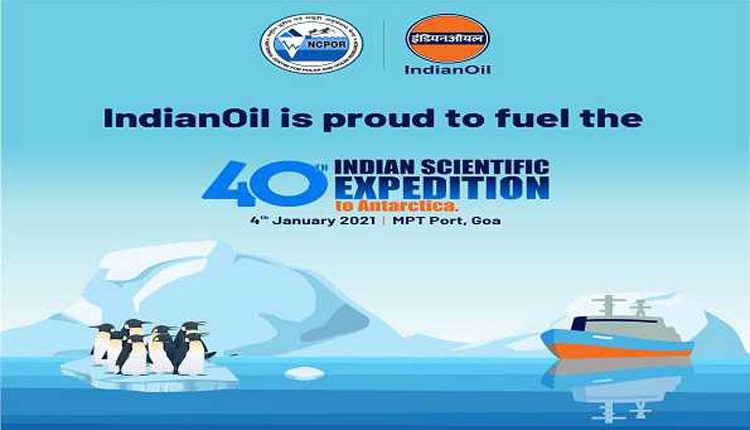 Vasco, Jan 4 (FN Bureau) Indian Oil Corporation Ltd, country’s major fuel supplier, has supplied Jet A1 fuel, lubes and Marine Gas Oil (MGO) as a bouquet offering for the prestigious 40th Indian Scientific Expedition to Antarctica (ISEA) mission. The unique feature of this supply is that the aviation fuel Jet A1 has been supplied in bulk and packed form to a non-aviation customer and is delivered to an ocean-going vessel for the first time. The fuel will be used for aviation support and power generation units as well as in snowmobiles and for the voyage itself.

After about 22 years, yet again, the Antarctica expedition is procuring fuel from India. Till the last expedition, fuel was being obtained from outside the country. The expedition needs various types of fuel and lubricants for their logistic needs at the two Indian stations in Antarctica. IndianOil’s strength to provide a complete energy solution to National Centre for Polar and Ocean Research (NCPOR) via a single window is a feather in its cap and a support for “Make in India” objectives. The fueling of 40thISEA by country’s oil major IndianOil exhibits the spirit of “Atmanirbhar Bharat” – a clarion call for a self-reliant India given by Prime Minister Narendra Modi.
At Mormugao Port here, Gurmeet Singh, Director (Marketing), IndianOil and Dr M Ravichandran, Director, NCPOR, in the presence of Dr E Ramesh Kumar, Chairman, Mormugao Port Trust and Dr N Vinodkumar, Postmaster General, Goa Region, attended the fueling ceremony of the 40thISEA.

This 40th expedition marks four decades of Indian scientific endeavour in Antarctica and is being undertaken with the ice class vessel M V Vasiliy Golovnin, which has a heli-hangar that accommodates two helicopters used for conveyance in the field and to move cargo between the ship and the Antarctic stations. Also on the occasion, Dr Vinodkumar released two first-day covers – one to commemorate the 40th Indian Scientific Expedition to Antarctica, and the second one to commemorate the four decades of India’s Antarctica programme, under which the first Indian expedition to Antarctica sailed from Goa on December 6, 1981 and reached the shores of this polar continent on January 9, 1982.

ASI Akash suspended on charges of dereliction of duties