India – return as ODI series gets underway in Sydney 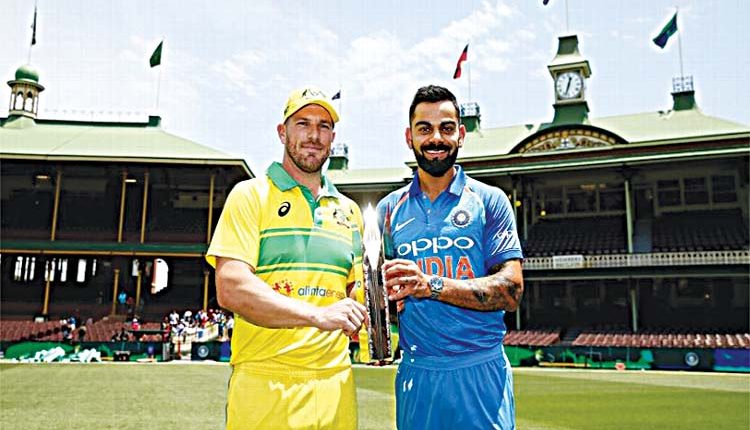 Sydney, 26 Nov (Bureau)- India kick off their tour Down Under with a three-match ODI series, the first of which takes place on Friday in Sydney. Both teams are almost full-strength, with Rohit Sharma being the only big-name player not to feature. Aaron Finch will continue to lead Australia, with Pat Cummins serving as his deputy. KL Rahul was named vice-captain of India’s limited-overs side in Rohit Sharma’s absence. Australia last featured in an international match in the limited-overs series against England in September, ahead of the start of the IPL. India, meanwhile, was last seen in action in the tour of New Zealand earlier this year. The last time both these sides met was in a three-match ODI series in January in India, which the Men in Blue clinched 2-1. With one of the biggest rivalries in world cricket set to take place, it’ll be an exciting watch for all cricketing fans.

It’s likely to be sunny in Sydney on Matchday. The temperature will be around 24 degrees Celsius for most of the match, with minimal chance of rain expected. The pitch at SCG is generally friendly to both the batsmen and the bowlers. Pacers are likely to have more impact than the spinners, but there will be some turn on offer. Batsmen must take some time to settle down before playing their shots. A score of 260-270 can be considered as par. The Aussies have a pretty settled lineup in the ODI format. David Warner and Aaron Finch should continue opening the batting, with Steve Smith and Marnus Labuschagne set to slot in at No. 3 and No. 4 respectively. Marcus Stoinis and Glenn Maxwell should form the side’s middle-order, with the latter having a point to prove after a sub-par IPL 2020. The impressive Alex Carey should keep wickets. Their regular pace bowling trio of Pat Cummins, Mitchell Starc, and Josh Hazlewood should be in the playing XI. Adam Zampa is likely to be the only spinner, with Maxwell capable of chipping in with some overs.

With Rohit Sharma not in the limited-overs squad, Mayank Agarwal and Shikhar Dhawan are favorites to open the batting together. Virat Kohli, Shreyas Iyer, and KL Rahul would form a much-improved middle-order for the side. Hardik Pandya is set to make a comeback to international cricket after recuperating from an injury. Ravindra Jadeja is likely to be in the playing XI as well. Yuzvendra Chahal, Mohammed Shami, and Jasprit Bumrah are certainties to feature in the game. It’ll be a toss-up between Shardul Thakur and Navdeep Saini for the third pacers’ slot.