India doubles the number of scholarships to Madagascar for higher education 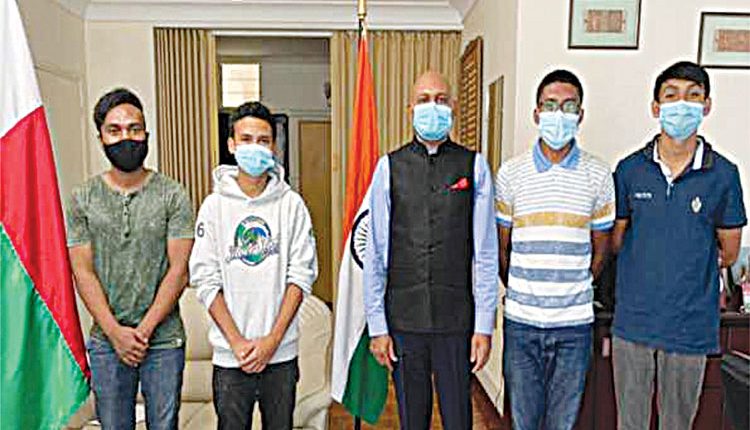 Antananarivo, Jan 29 (FN Agency) With the mission to transfer skills, technologis and capacity building of students and professionals in developing countries. India doubled the number of scholarships to Madagascar for higher education in its premiere universities. Aiming to increase the academic opportunities for students from African countries, the Government of India through Indian Council for Cultural Relations (ICCR) , established to share skills, technologis and for capacity building, has offered 23 scholarships for Malagasy students to pursue their studies in various universities and institutes in India for the academic year 2020-2021. After meeting the Malagasy students in Antananarivo travelling to India to pursue their higher studies, the Indian Ambassador in Madagascar Abhay Kumar said that the Malagasy students would be pursuing their Master’s degree in Cyber Security at the National University of Forensic Science in Gujarat.

Wishing them a very fruitful and productive time studying in India, he said that the scholarships offered to Malagasy students this year was more than double the number of ICCR scholarships offered than in 2019-2020 and an all time high in the number of scholarships offered to Madagascar annually since 2014. He also hoped that Malagasy students will learn about India and Indian culture during their stay in India and will act as a bridge between India and Madagascar upon their return. The Malagasy students have been admitted to pursue their studies in various premier Indian universities such as Jawaharlal Nehru University, Delhi University, National Forensic Science University, Gujarat Technological University and Andhra University in bachelor and masters courses such as Business Administration (MBA), Economics, Cyber Security, Mechanical, Electrical, Electronic and Marine Engineering, Computer Applications, Development Economics, History, Spanish, English, Biology, Food and Nutrition, Tourism Hospitality, Commerce, Marketing and Management Studies. He said that the first batch of 4 students out of 23 has already left Madagascar to join the National University of Forensic Science and Andhra University today.

ICCR offers nearly 3,365 scholarships annually on behalf of the Government of India to developing countries. 900 of these scholarships are exclusively for students from African countries. Due to Covid-19 pandemic, the entire process of college admission of ICCR-sponsored students has slowed down in the current academic year. Despite these challenges, ICCR has managed to obtain 1878 student acceptances out of 2678 college offers. Bilateral cooperation between India and Madagascar has been strengthening in various sectors, ICCR scholarships being one of them. India with many renowned universities is a favoured destination for higher education among students in Madagascar. Many Malagasy students have pursued their studies in India till date. These include 81 Malagasy students who have benefited from ICCR scholarships since 2014 and about 100 Malagasy students are studying in India on self financing scheme. About 854 young Malagasy professionals between the ages of 25-45 have also benefited from ITEC scholarships so far since 2007.