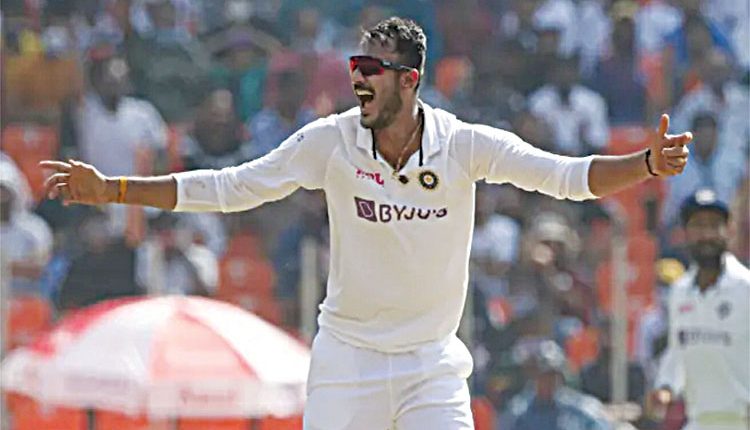 Ahmedabad, Feb 24 (Agency) That is that on an absorbing first day in Ahmedabad. England will be relieved to have dismissed Kohli on the stroke on stumps but there is no question that it has been India’s day. After England won the toss and chose to bat, they had started relatively well. Ishant, playing his 100th Test, struck in his second over, but England progressed to 74 for 2, with Zak Crawley making an effortless half-century. But Axar’s six-for with Ashwin’s support saw them lose 8 for 38, and you don’t win many Test matches after posting 112 all out. In reply, India were made the work hard for their runs early on, but are only 13 runs behind with seven wickets in hand. Rohit Sharma has been excellent once more, and will resume on 57 tomorrow afternoon.

In what turned out to be a hard-fought opening session of the Ahmedabad Test, India made incisions at regular intervals to leave England in a spot of bother at 112 allout. Axar Patel was the chief wicket-taker for the home side, picking up a couple of scalps. England, who won the crucial toss, began on a rather shaky note, losing Dom Sibley in the third over. Ishant, playing in his 100th Test, got one to straighten off the pitch to force Sibley to edge one to the slip cordon. At that stage, Crawley took the aggressive route essaying a few well-timed flicks and drives. Just when it seemed as if Crawley was guiding England to safer waters, Axar struck with his first ball at his home ground by accounting for the scalp of Jonny Bairstow. The number 3 batsman played for the turn while facing the straighter-one and was trapped in front. Bairstow placed his belief in the review but couldn’t overturn it. With the visitors in a spot of bother, Root and Crawley joined forces to stitch an alliance of 47. Once again Crawley was the aggressive partner as he continued to deal in drives and flicks. He soon reached his fifty in a mere 68 deliveries.

World-Class Dredgers will be made in India soon