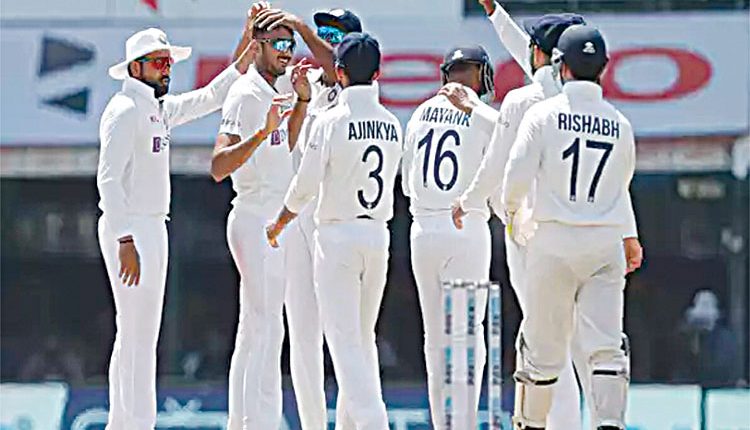 Chennai, Feb 16 (FN Agency) R Ashwin’s eight-wicket haul and a century, Rohit Sharma’s excellent knock in the first innings and a five-wicket haul on debut for Axar Patel combined to form the centerpiece of India’s massive 317-run victory in the second Test against England in Chennai that helped them square the series on Tuesday (February 16). Chasing 482 for victory, the visitors were skittled out for 164 as India registered their biggest win against England (in terms of runs) and also their biggest in a Chennai Test. India started off with Mohammad Siraj and Axar at the start of the fourth day’s play and while both tested the England batsmen, Joe Root and Dan Lawrence did not let the bowlers get the better of them. It took the introduction of Ashwin to get India the first wicket of the day as Lawrence stepped down the track but Ashwin sneaked the ball between the batsman’s legs, with Pant effecting a fine stumping.

Root, as has been the case in this series, preferred the sweep shot – scoring his first boundary by swiping an Axar delivery in front of square. The England captain was also quick with his feet, adjusting well to play a half-pull off the left-arm spinner. At the other end, Ashwin was keeping Ben Stokes on his toes, going past the outside edge plenty of times. He eventually got the left-hander to inside edge one on to the pad, with the ball lobbing up to Virat Kohli at slip. Ishant Sharma bowled a few overs with reverse swing on offer before Kuldeep Yadav was finally handed the ball. Meanwhile, the sweeping from Root continued and he even brought out the reverse sweep, which encouraged Ollie Pope to also play that shot. But Pope’s attempt to sweep Axar resulted in England losing another wicket as Ishant held on to a simple catch at deep midwicket. Kuldeep, though, was unlucky not to pick up the wicket of Root with Siraj putting down a sitter but the wrist spinner heaved a sigh of relief when Ben Foakes attempted a sweep, only to hand Axar a catch at midwicket.

Moeen Ali got a glove off Kuldeep early in the second session, with the ball going over slips. But Root had no such luck when a sharp turner from Axar took his glove and landed in the hands of Ajinkya Rahane. Olly Stone had a short stay trapped in front by Axar, who became the sixth Indian spinner to bag a fifer on debut. Moeen decided to play his shots, striking a six and a four off Kuldeep before hitting three successive maximums off Axar. Ashwin wasn’t spared either as Moeen threatened Misbah-ul-Haq’s record for the fastest Test fifty. But he was out stumped off Kuldeep for 43 as India completed a record win. The visitors were thoroughly outplayed by India in this game. It started with India winning the toss and Rohit putting on an exhibition of strokeplay during his knock of 161 on a dry wicket with explosions right from the first session. Rahane and Rishabh Pant also came up with useful knocks to help India post a hefty total of 329. England’s batsmen were lacking in application, resulting in the tourists being bowled out for 134, with Ashwin bagging his 29th fifer. Ashwin then proved batting on this pitch wasn’t as much as a struggle as it was made out to be, scoring his fifth Test ton while Kohli scored a fifty, helping India set England a mammoth target which they fell well short of.