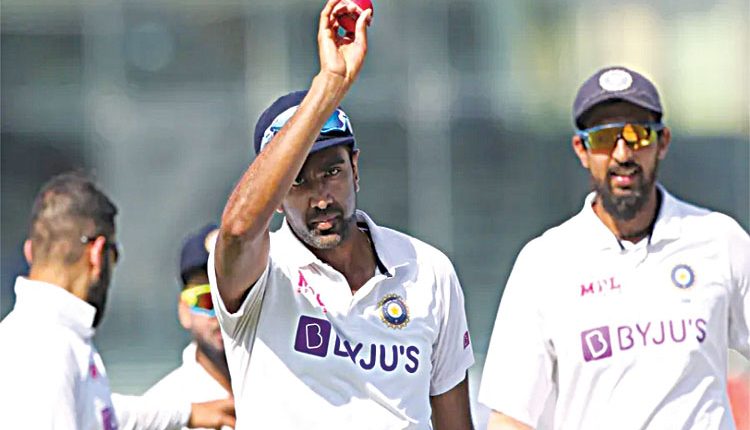 Chennai, Feb 14 (FN Bureau) R Ashwin’s five-wicket haul, his 29th in Test cricket, helped India to a dominant position in the second Test against England at the M Chidambaram stadium in Chennai. The hosts, whose first innings ended at 329 after Rishabh Pant scored an unbeaten 58, bowled England out for 134. Rohit Sharma then batted positively for his 24 not out, with a few lucky breaks during his stay, as India ended Day 2 at 54 for 1 in their second essay, 249 ahead. With an authoritative pull for a six, a crunching drive through the off side, and a well-placed paddle sweep, Rohit was away in the second innings while Shubman Gill also jumped down the track from time to time. India’s school of thought – countering a spin-friendly track with positive batting – was in complete contrast to England’s batting in their first innings as the hosts were busy building their lead. There were a couple of lucky breaks too for Rohit as he had to hurry back to the crease after being denied a single, and later survived due to a missed stumping opportunity while Gill top-edged a sweep and the ball landed safe.

Gill’s outing was ended by Leach, who trapped him leg-before with a straight one, with India also losing a review in the process. England lost a review of their own – Rohit appeared to have tucked his bat behind the pad while playing a Moeen delivery but the onfield umpire said he had offered a shot, much to the frustration of Joe Root. Rohit then used the DRS to reverse an on-field decision, with replays revealing that he had got an edge while attempting a reverse sweep off Leach. Meanwhile, Cheteshwar Pujara who walked out at No. 3 despite not fielding today due to a finger injury he sustained in the first innings, whipped a Leach delivery off the back foot for his first four. Rohit then survived a stumping referral and remained unbeaten along with Pujara at Stumps.

Earlier on Sunday (February 14), it was a frenetic opening session with eight wickets going down on a pitch that deteriorated further. Pant struck a few lusty blows to bring up a 65-ball fifty but he ran out of partners as Moeen Ali and Olly Stone picked up two wickets apiece to end India’s innings. Ishant Sharma then bagged a wicket in his first over, trapping Rory Burns in front with a delivery that came in. Dom Sibley scored a few boundaries off Ishant but fell to Ashwin while trying to sweep – with the ball striking the back of his bat en route to Virat Kohli at leg slip. Joe Root was keen to sweep but the shot brought about his downfall, giving Axar Patel his maiden Test wicket while Ashwin struck off the final delivery before Lunch to have Dan Lawrence caught at short leg. Despite the ball getting old as the day progressed, the spinners kept chipping away to extend India’s dominance post lunch. Ben Stokes fell early in the second session, beaten by Ashwin’s flight and drift to be bowled. Ollie Pope and Foakes managed to keep the Indian bowlers at bay with their patient batting, forcing Ashwin out of the attack after 16 overs for the offspinner across two sessions. Kuldeep Yadav and Mohammad Siraj were given a few overs, with the latter accounting for Pope down the leg side to end a fighting partnership worth 35 that lasted for 15 overs. India lost their reviews by the time Tea was taken but Axar and Ashwin, brought back into the attack, added to their wickets tally.

Foakes continued his fight into the third session even as he was running out of company. England were eight down when the post-tea session started and for close to 10 overs, the wickets column did not change as Jack Leach hung around with Foakes. But the reintroduction of Ishant brought the 25-run stand to an end, with Leach sent back by Pant’s one-handed stunner. Stuart Broad failed to assist Foakes, bowled by Ashwin who bagged his second fifer in as many innings as India pocketed a hefty 195-run lead.