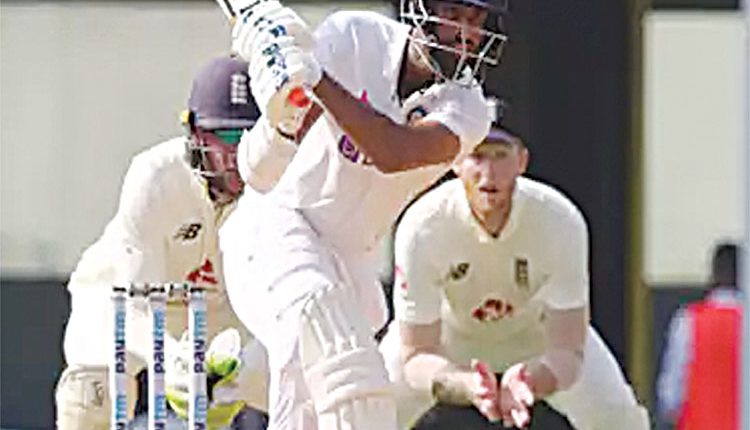 Chennai, Feb 9 (FN Agency) Half centuries by Shubman Gill and skipper Virat Kohli went in vain, as England, thanks to three-wicket burst by fast bowler James Anderson and a four wicket haul by left arm spinner Jack Leach, defeated India by 227 runs and took a 1-0 lead on the final day of the first cricket test here today. Set a daunting 420 to win, India, resuming at 39 for one, lost wickets at regular intervals, despite Gill scoring an attractive 50 (83, 7×4, 1×6) and skipper Virat Kohli contributing a fighting 72 (104 balls, 9×4). For England Jack Leach claimed 4 for 76 and James Anderson 3 for 17, while Jofra Archer, Ben Stokes and Dom Bess claimed a wicket each. After overnight batsman Pujara (15, 38 balls, 1×4) fell to a superb delivery from Jack Leach, which gripped, bounced and turned and the edge climbed to Stokes at first slip, Anderson breathed fire taking two of his three wickets in one over. Anderson, who got some reverse swing struck immediately after he was introduced in the attack. First he breached the defence of well set Gill, who was looking for a big score, with a ball that came in sharply and in the same over got rid of vice-captain Ajinkya Rahane (0) in a similar fashion.

Anderson got his third wicket when first innings hero left hander Rishab Pant spooned a slower one to England skipper Joe Root at short cover. After Washington Sundar, who displayed his batting skills in the first essay, too fell without scoring, Kohli, who it three successive fours of off spinner Dom Bess and R Ashwin offered a dogged resistance. But the exit of Ashwin and Kohli, who was bowled by Ben Stokes to a ball that kept very low, in quick succession, exposed the tail and the England bowlers, especially Leach, wrapped it up as the contest ended shortly before tea. Joe Root, who became the first cricketer to score a double hundred in his 100th test, was adjudged the man of the match. The second test would start in the same venue here on February 13.