Govt proposes to put farm laws on hold for period of 1-1.5 years, next round of talks today 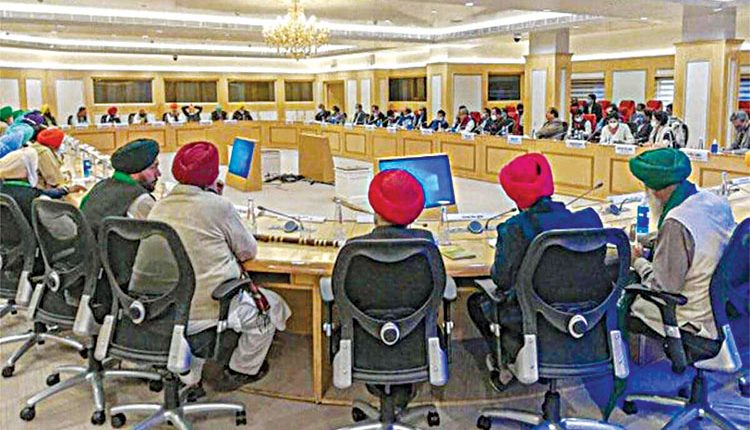 New Delhi, Jan 20 (FN Representative) The tenth round of talks between the Government and farmers’ unions concluded on Wednesday evening, with the Government proposing to put the farm laws on hold for a period of one to one-and-a-half years. Both sides have agreed to meet for the next round of talks on January 22. Union Agriculture Minister Narendra Singh Tomar, Union Minister for Railways, Commerce & Industry and Consumer Affairs, Food and Public Distribution Piyush Goyal and Union Minister of State for Commerce and Industry Som Prakash participated in the tenth round of talks with the representatives of 41 Farmers’ Unions, here at Vigyan Bhawan.

Talking to reporters after the marathon meeting, which concluded after five hours, Mr Tomar said the Government has proposed to the farmers’ Unions that the implementation of Farm laws should be kept on hold for a period of one to one and half years. He said during this time representatives of farmers’ Unions and the Government can discuss all issues related to the farmers’ agitation so that an appropriate solution can be arrived at. Mr Tomar said during the talks the representatives of the farmers’ unions said that they will discuss the Government’s proposal in detail and will come for dialogue on January 22. The Union Agriculture Minister once again reiterated that the farm laws are going to bring about revolutionary change in the life of farmers and in the agriculture sector. He said the Government is committed to protecting the welfare of farmers and no one can take the farmers’ land away from them.

The Union Agriculture Minister appealed that clause wise discussion of the farm laws can take place for the talks to be meaningful, farmers’ Unions can also give alternatives other than repeal of the laws. He said the Government is committed to continuing the dialogue process with an open mind and pure intention. Mr Tomar said the eleventh round of talks will be held on Friday at 1200 hrs. The farmers’ protest over the three farm laws entered the 56th day today, as the protestors continued their stir at various entry points of the National Capital region. Thousands of farmers, especially from Punjab and Haryana, are staging a sit-in protest along the Delhi borders. The protest started on November 26. The farmers are demanding a complete rollback of the new farm reform laws and a guarantee on the Minimum Support Price.