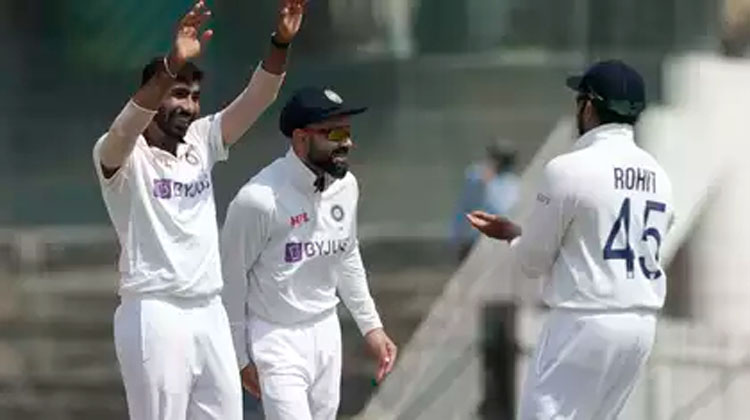 Chennai, Feb 5 (Agency) England made a steady start before two quick wickets pegged them back at 67 for two in 27 overs at lunch on the opening day of the first cricket test match against India at the M A Chidambaram stadium here today. Opener Dom sibley (26, 96 balls, 3×4) and skipper Joe Root (4, 5 balls), playing his 100th test, were at the crease. Using first use of the wicket after winning the toss on a wicket that looked perfect for batting under hot sun, England openers Rory Burns and Dom Sibley made a steady start. Despite the left hander Rory Burns getting a reprieve as early as in the second over of the innings, when keeper Rishab Pant threw himself to his right and only managed to get his finger tip when the batsmen shuffled across to glance Bumrah, both the openers appeared confidence personified.

They negotiated the new ball attack of Ishant Sharma and Bumrah with a stright bat. Spin was introduced as early as in the seventh over when R Ashwin came into the attack, but the openers showed better application in handling them. Indian skipper Virat Kohli kept shuffling his bowlers and also brought in left armer Shahbaz Nadeem, but the English openers negotiated them well. However, two quick wickets, with about 10 minutes left for lunch, pegged the England team back. After doing all the hard work, Burns (33, 60 balls, 2×4) went for a needless reverse sweep off Ashwin and only gloved to Rishab Pant for an easy catch. He added 63 for the opening wicket with Simbley in 23.5 overs. More than the bowling, it was the poor shot selection that undid Burns, who appeared to be growing in with every passing over.

Soon, Dan Lawrence, who came in at No.3, was trapped plumb in front by Jaspirt Bumrah, as England slid from 63 for no loss to 63 for two, before the players headed for the lunch break. Scoreboard: Australia: Rory Burns-33, Dom Sibley-28*; India: Bumrah- 1, Ashwin-1.

Logitech is Raising the Bar for the Video Conferencing Industry