Bangladesh wants India’s help for connectivity with Nepal and Bhutan 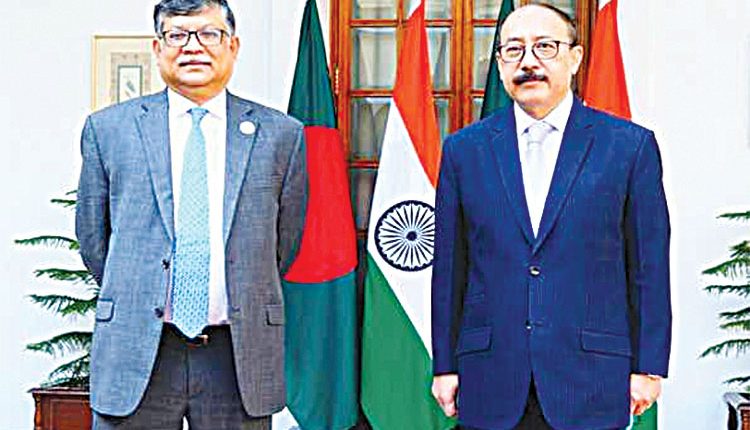 Dhaka, Jan 31 (FN Representative) Bangladesh wants more opportunities from India to use their land, railways and land ports to enhance connectivity with Nepal and Bhutan. Bangladesh Foreign Secretary Masood bin Momen made the request to India at a meeting of foreign secretaries of the two countries in Delhi on Friday. In 2016, it was agreed to establish Bangladesh-India-Nepal-Bhutan interstate rail link. This time, Dhaka requested Delhi to allow Bangladesh to use new land, railways and land ports. The foreign secretary-level meeting, held at the Hyderabad House in New Delhi was mainly to prepare for Indian Prime Minister Narendra Modi’s visit to Dhaka in March. However, the press release sent by the Dhaka Foreign Ministry shows that other issues were also discussed at the meeting. According to the press release, the issue of signing the Teesta water sharing agreement was raised again at the meeting of the Bangladeshi delegation led by Masood bin Momen and the Indian delegation led by Harsh Vardhan Shringla.

The Indian side assured that the matter was under consideration and proposed to finalize a framework agreement on the sharing of water from six identical rivers. The foreign ministry said the talks focused on issues of mutual interest, especially preparations for Indian Prime Minister Narendra Modi’s visit to Dhaka in March to attend Mujib’s birth centenary celebrations. 2021 marks the 50th anniversary of Bangladesh’s independence as well as the 50th anniversary of Bangladesh-India diplomatic relations, which the two countries will jointly celebrate at several occasions. Bangladesh thanked the Government of India for inviting the contingent of the Bangladesh Armed Forces to India’s Republic Day Parade on January 26, and for conferring the Padma Shri on two Bangladeshis. The issue of cooperation on Covid-19 also came up in the meeting.

The Foreign Secretary of Bangladesh said that out of the 30 million doses of vaccines purchased by Bangladesh, 50 lakh doses have been received in Bangladesh and the rest will be available in the due course of time. During the meeting, Dhaka requested to take necessary steps to start speedy motor connectivity between Bangladesh-India-Nepal. Cooperation between the two countries’ border guards has been stepped up to reduce border killings to zero. After meeting the Indian Foreign Minister, the Foreign Secretary handed over a letter from the Foreign Minister of Bangladesh containing a formal request for Bangladesh’s inclusion on the India-Myanmar-Thailand Highway.