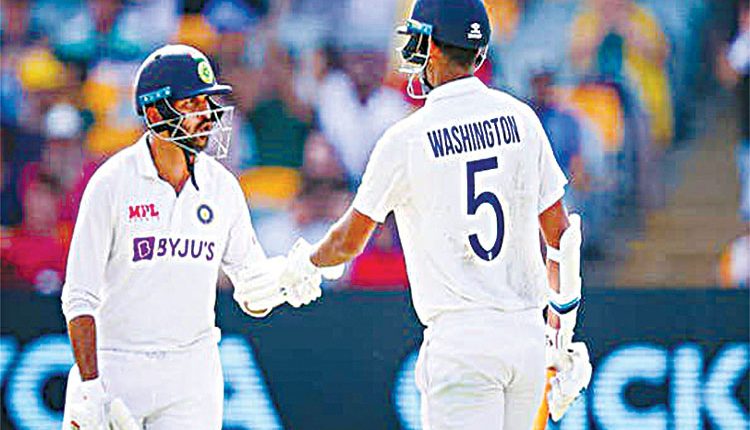 Brisbane, Jan 17 (FN Agency) Australia were 21/0 at stumps after a fighting seventh-wicket partnership between inexperienced Washington Sundar and Shardul Thakur helped India score 336 in their first innings in reply to hosts’s 369 on day three of the series-deciding fourth Test, here on Sunday. David Warner (20) and Marcus Harris (1) negotiated a tricky six-over period before stumps to build Australia’s lead to 54 runs. Earlier, India resumed at 62/2 in the morning after rain caused play to be abandoned at tea on the second day. The Australian bowlers were right on the money under an overcast sky and bowled with a lot of discipline. Cheteshwar Pujara was tested with a bouncer and though he did well to survive, India’s dependable No 3 was dismissed in the same over by Hazlewood.

Pujara, who had remained solid having faced 94 balls, once again received a peach of a delivery. With the overnight partnership broken, Australia continued to build pressure. They were rewarded when captain Ajinkya Rahane nicked one to the third slip off Starc. Although India lost both their experienced batters, they managed to add 99 runs in the first session. Batting at No 5 for the first time in the series, Mayank Agarwal came out with positive intent and kept rotating the strike with Rahane. Runs continued to flow for India even after Rahane’s dismissal when Pant arrived in the middle. However, Mayank (38) got out off the second ball of the second session as he went for an expansive drive but only nicked it to Steve Smith in the slips. India lost their fifth wicket for 161 and lost Pant (23) too in quick succession. Australia were on top when the tourists slumped to 186/6 shortly after lunch, but Sundar (62) and Thakur (67) both made maiden half-centuries in a 123-run partnership that frustrated the home side. Their stand is the highest by an Indian pair in Tests at the Gabba. Both Sundar and Shardul batted with a lot of resolve, causing more concerns for the hosts. Shardul, who looked very comfortable against at the crease, hit a maximum to bring up his maiden half-century in Test cricket. Later, Sundar also got to his maiden Test fifty. The duo was going strong until Shardul was bowled by Cummins for 67. Navdeep Saini then walked in and stayed at the crease for 14 deliveries, till Hazlewood got the better of him.

Siraj walked in and went for a couple of boundaries and kept the scoreboard ticking. Washington Sundar was the next to depart. An excellent catch from Cameron Green in the gully ended Sundar’s stay in the middle. A superb innings on debut as he brought the deficit down to 41. Natarajan and Siraj batted for a few more deliveries until Hazlewood picked up his fifth scalp of the innings to bowl India out for 336. With the series tied at 1-1, Australia must win to claim the Border-Gavaskar Trophy while India can retain the coveted prize with a draw.

Ind vs NZ: Rain washes out Day 4 of WTC Final