37 killed as bus falls into canal in Sidhi 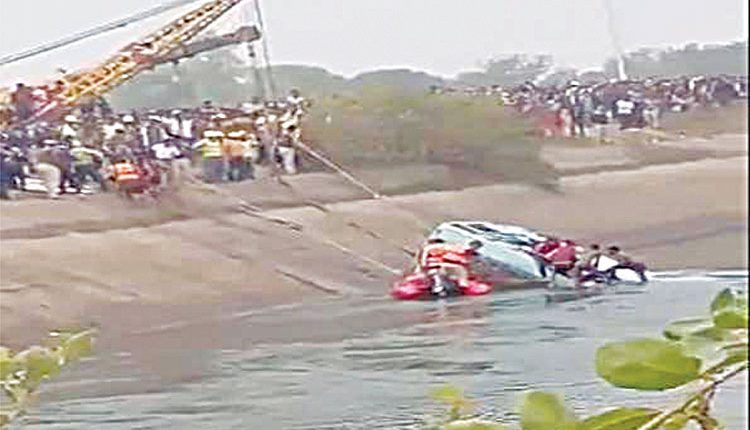 Sidhi, Feb 16 (FN Agency) As many as 37 people lost their lives after a bus fell into a canal in this district of Madhya Pradesh on Tuesday morning. According to Rewa Divisional Commissioner Rajesh Jain, the dead comprised of 16 women, 20 men and one child. Soon after the tragedy, seven people had managed to swim to safety, he said, adding relief and rescue work is almost complete.

A search is being conducted in the surrounding areas apprehending that some passengers may have been swept away by the flow of water in the canal. On getting the information, police and administration and staff had rushed to the accident spot, which is about 80 kilometers away from Sidhi district headquarters, Mr Jain said. Meanwhile, police sources said that this canal attached to the Bansagar dam reservoir was filled with more than 20 feet of water. After the accident, the work of releasing water from the dam reservoir, located about 40 km away, was stopped.

Due to this the water level of the canal reduced expediting the relief and rescue work. Sources said that the bus had left from Sidhi to Satna early this morning. As there was a traffic jam in the Chuhiya Valley at around 0800 hrs in the morning, the bus took another route to reach Satna. This route was adjacent to the canal and the suddenly the driver lost control over the wheels and the nose-dived into the canal. The bus was reportedly carrying passengers from Sidhi and nearby districts. The dead are being identified, the sources said.

MP Home Minister condoles loss of lives in Sidhi bus accident
Bhopal, Feb 16 (FN Bureau) Madhya Pradesh Home Minister Dr Narottam Mishra on Tuesday expressed shock over the Sidhi bus accident which claimed around 40 lives this morning. “The bus accident in Sidhi is heartbreaking. We are in constant touch with the authorities. High officials of the district and division are present at the scene,’ Dr Mishra tweeted. He further said that the state government has sent Water Resources Minister Tulsi Silavat and Minister of State Ram Lakhan Patel directly to the accident spot. The Cabinet meeting has been also been deferred. Dr Mishra said as a mark of respect to the bereaved, a function at the Chief Minister’s residence which was to be attended virtually by Union Home Minister Amit Shah has been cancelled.

Vaccines & Vaccinations – All we need to know