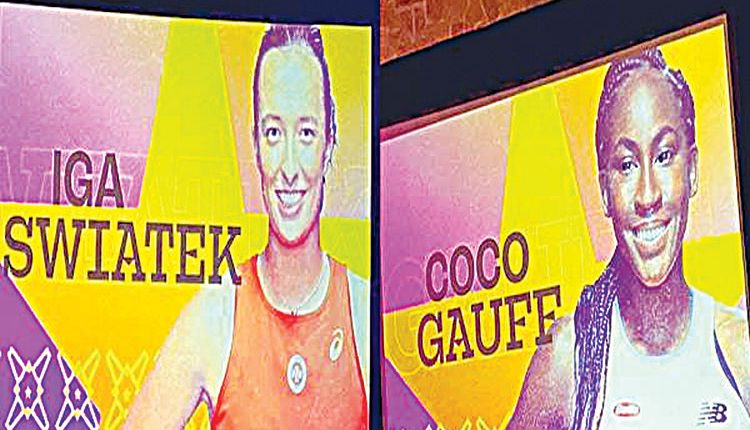 Fort Worth (Texas, USA) Oct 29 (FN Agency) The stage is set for the WTA Finals, as the groups for the round-robin portion of the prestigious year-ending championships were drawn and the world no. 1 Iga Swiatek (Poland) and Coco Gauff (USA), have both landed in the same group. The two youngest players in the field, 21-year-old Swiatek and 18-year-old Gauff, have drawn in the Tracy Austin Group.Austin is a former World No.1 in singles and the four group names — Tracy Austin, Nancy Richey, Rosie Casals and Pam Shriver — are inspired by four legendary American champions.Swiatek, the winner of eight titles this season including Roland Garros and the US Open, leads the Tracy Austin Group. She will have a rematch of the Roland Garros final against No.4 seed Coco Gauff during round-robin play.

The No.6 seed Caroline Garcia (France), winner of three titles this year, and No.8 seed Daria Kasatkina, a two-time titlist in 2022, round out the Tracy Austin Group. The No.2 seed Ons Jabeur (Tunisia), who reached her first Grand Slam finals at Wimbledon and the US Open this year, tops the Nancy Richey Group. The No.3 seed Jessica Pegula (USA), who won her first WTA 1000 title in Guadalajara last week, was also drawn into the Nancy Richey Group.In the doubles field, No.1-seeded Czechs Barbora Krejcikova and Katerina Siniakova lead the Rosie Casals Group. The duo won three of the four Grand Slam titles this year, and they completed the Career Golden Slam with their US Open title. The No.3 seeds Gauff and Pegula are in the same group as Krejcikova and Siniakova. Gauff and Pegula are the two players this year, who have qualified in both singles and doubles.

The Pam Shriver Group is headed by No.2 seeds Gabriela Dabrowski and Giuliana Olmos. Each singles player or doubles team will face off against all of the other participants in their respective group during the first six days of the tournament.At the end of the round-robin matches, the top two players or teams from each group will advance to the single-elimination semifinals. The group stage of singles and doubles play begins on October 31 at the Dickies Arena in Fort Worth. The semifinals will be played November 6, and the singles and doubles finals will be November 7.Full Singles Group:Tracy Austin Group1. Iga Swiatek4. Coco Gauff6. Caroline Garcia8. Daria KasatkinaNancy Richey Group2. Ons Jabeur3. Jessica Pegula5. Maria Sakkari7. Aryna SabalenkaThe full doubles groups:Rosie Casals Group1. Krejcikova/Siniakova3. Gauff/Pegula6. Xu/Yang8. Krawczyk/SchuursPam Shriver Group2. Dabrowski/Olmos4. Kudermetova/Mertens5. Kichenok/Ostapenko7. Danilina/Haddad Maia

Nadal, Djokovic in same half of Paris Masters draw