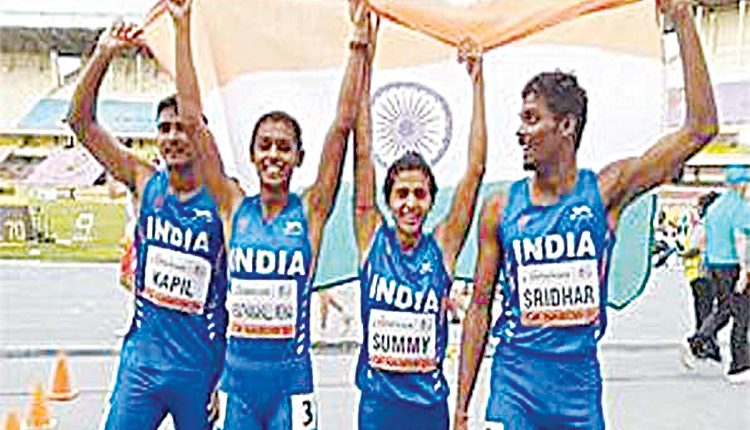 The Indian quartet – with Abdul Razak Rasheed running the lead leg – had clocked 3:23.36 in the heats earlier in the morning. Priya and Summy ran their women’s 400m heats not long after that. They recovered well to ensure that the efforts of Barath and Kapil, who ran a blistering anchor leg in 46.42 seconds, did not go in vain. Barath, the Federation Cup Junior Championships winner, was credited with a time of 47.12 for the lead-off leg and handed over the baton to Priya in the second place behind South Africa. Priya dug deep in her reserves and, with a time of 52.77, was the third best among those who ran the second leg. Summy’s kept India in the medal hunt and she ran a good leg in 54.29. Kapil strove hard on the anchor leg but despite being the fastest of the runners in the final was unable to close the gap with Poland and Nigeria.

He was credited with having run his lap in 46.42 seconds, inspired by the efforts of his three team-mates. It is the fifth medal won by India in World Junior Championships after the bronze medals won by Seema Antil (Discus Throw, 2002), Navdeep Kaur Dhillon (Discus Throw 2014) and the gold medals claimed by Neeraj Chopra (Javelin Throw, 2016) and Hima Das (400m 2018). Overall, it was a good day for India as Priya Mohan (women’s 400m), Amandeep Singh Dhaliwal (men’s Shot Put) and Kunwar Ajai Raj Singh Rana and Jay Kumar (both men’s Javelin Throw) qualified for their respective finals. Priya finished third in her heats in 53.79 seconds but qualified as one of the two best finishers alongside Ukraine’s Tetyana Kharashchuk. Summy finished fifth in her heats in 55.43 seconds while Amandeep Singh Dhaliwal made it to the shot put final with a best throw of 17.92m. Kunwer Ajai Raj Singh Rana (71.05m) and Jay Kumar (70.34m) earned berths in the Javelin Throw final to be held on August 20.

Defence start-up challenge to be launched