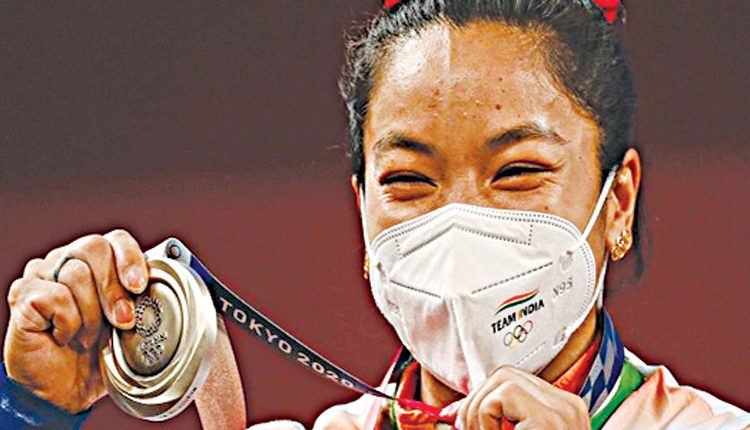 Tokyo, Jul 25 (Agency) Saikhom Mirabai Chanu clinched silver medal in the women’s 49 kg weightlifting category at the Tokyo 2020 as India won a medal on the first day of the Olympic Games for the first time in its history, here on Saturday. The 26-year-old lifted a total of 202 kg (87kg+115kg) and became the first Indian weightlifter to win a silver at Olympics. Chanu’s win comes two decades after Indian trailblazer Karnam Malleswari became the first Indian woman to win an Olympic medal. Malleswari won a bronze medal in the women’s 69kg weight category at the 2000 Sydney Games. With this, she exorcised the ghosts of the 2016 Rio Olympics where she had failed to lift weight in any of her three attempts in clean & jerk.

The gold in the event went to China’s Hou Zhihui, who set an Olympic record with a lift of 210 kgs (94+116). Aisah Windy Cantika of Indonesia bagged the bronze with an effort of 194kg (84kg+110kg). At the Tokyo International Forum, Mirabai began with a 84kg lift in her first attempt in the snatch segment. Later, the Indian ace improved with an 87kg lift that put her in an advantageous position. However, her momentum was cut short once Hou Zhihui hit her strides with a 88kg lift in her first attempt. Zhihui then set a new Olympic record in snatch at 94kgs in her third lift. In the clean and jerk round, Mirabai Chanu began with an effort of 110 kgs, before bettering it with a performance of 115 kgs in the second. Though, Mirabai tried to challenge the Olympic champion with an ambitious 117kgs in her third attempt, Mirabai Chanu fell short of the mark.