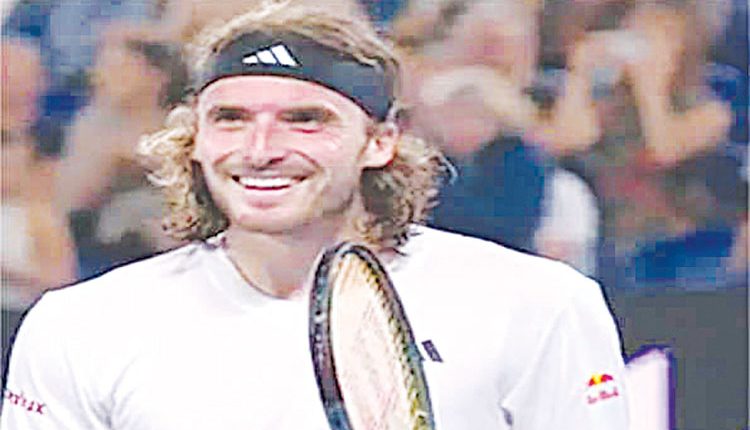 Melbourne, Jan 25 (UNI) Stefanos Tsitsipas is back in familiar territory at the Australian Open, reaching the semifinals for the fourth time in his past five visits after beating exciting Next Gen star Jiri Lehecka on Tuesday. The Greek needed five sets to down Jannik Sinner on Sunday but, back in the night session at Rod Laver Arena, advanced over the Czech in three, 6-3 7-6(2) 6-4.Tsitsipas continues to be clutch in big moments, saving all eight break points faced. Watching Tsitsipas play is often box office.Lehecka’s breakthrough event last year came in Rotterdam as a qualifier. Progressing to the semifinals, he extended Tsitsipas to three sets – helped by an early break. On Tuesday, it was Tsitsipas who broke early for 2-0. Lehecka must have thought he had done enough when his volley landed in the corner, but on the full stretch Tsitsipas delivered an outstanding lob that prompted a backhand overhead miscue on a fifth break chance.Tsitsipas cruised through his service games until 1-2 in the second. He, too, came up against five break points – but saved them all. He shook his racquet skyward, and his throngs of supporters in a city with a substantial Greek population responded.

However, Lehecka had momentum. His fizzed groundstrokes, including his forehands down the line, left the crowd gasping at times. When Tsitsipas made it to the tiebreak, those break points loomed large for Lehecka.And sure enough, Tsitsipas produced sizzling tennis. He struck five winners, ending the set with a rasping forehand crosscourt, AO reported. To his credit, Lehecka didn’t buckle starting the third. Indeed, he conjured three straight break points at 3-3. Tsitsipas pumped his fist skywards when saving the third one with an ace, and did the same on the next point with an outstanding forehand dig prior to a Lehecka volley error. Lehecka finally did buckle at 4-5 to end proceedings. If head-to-head records mean anything, Tsitsipas is on his way to a first final at Melbourne Park and second in his Grand Slam career. He holds a 5-0 mark against Thursday’s opponent, Karen Khachanov. Khachanov, however, is now finding his best form in Grand Slams, making two semifinals in succession after defeating Sebastian Korda earlier on Tuesday.