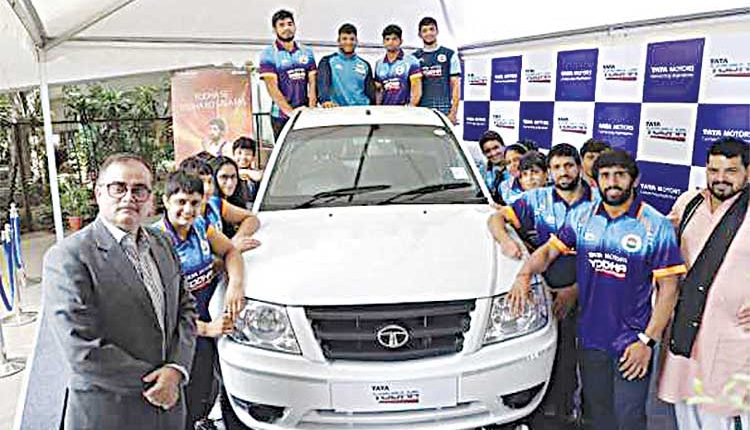 Mumbai, Aug 27 (Agency) Tata Motors and the Wrestling Federation of India (WFI) on Friday strengthened their long term partnership further with the announcement of the ‘Quest for Gold at Paris Olympics 2024’, a holistic development programme with the singular objective to win the coveted gold medal at next Games. As part of this initiative, WFI, with support from Tata Motors, will focus on the growth, progress and advancement of both men and women wrestlers, across age groups, by providing access to the right infrastructure, platform, opportunities and security.

‘Young and talented Indian wrestlers, ‘Yodhas’ will gain assured and enhanced access to world-class training facilities, internationally-reputed coaches and support through a rich nutritional programme,’ a release said. ‘In addition as part of this initiative, eligible senior wrestlers will be offered central contracts as also the budding junior wrestlers will be supported through virtuous scholarships along with insurance cover, medical and physiotherapy assistance,’ it added. Announcing the launch of this ‘Quest for Gold at Paris Olympics 2024’, Brijbhushan Sharan Singh, President, Wrestling Federation of India, said, ‘Tata Motors’ committed support since 2018 has helped Indian wrestling grow to greater heights. In the last 3 years, our ‘Yodhas’ have won more than 40-50 medals at international competitions including, 5 medals at the Senior World Wrestling championships – highest ever for India, record 11 medals at the just-concluded Junior World Championship, and 2 medals at recently held Tokyo Olympics, said Brijbhushan Sharan Singh, President, Wrestling Federation of India at the launch of the initiative.

‘The Cadet Wrestling Team, too, won its first title of the World Championship. The launch of our joint quest today should enable us to fulfil the entire nation’s longstanding aspiration of winning an Olympics Gold medal in wrestling at the next Paris Olympics in 2024,’ he added. Tata Motors also honoured the successful Indian wrestling team that participated in the Tokyo Olympics by presenting each member with its tough and rugged Tata Yodha pick-up to convey respect, appreciation and celebration of their heroism and success. Through our steadfast association with WFI, we will continue to promote, train and foster the nation’s rich wrestling talent,’ said Girish Wagh, Executive Director, Tata Motors.

All India U-16 Chess tournaments in Hyderabad from Sept 20; registrations start from Sept 1