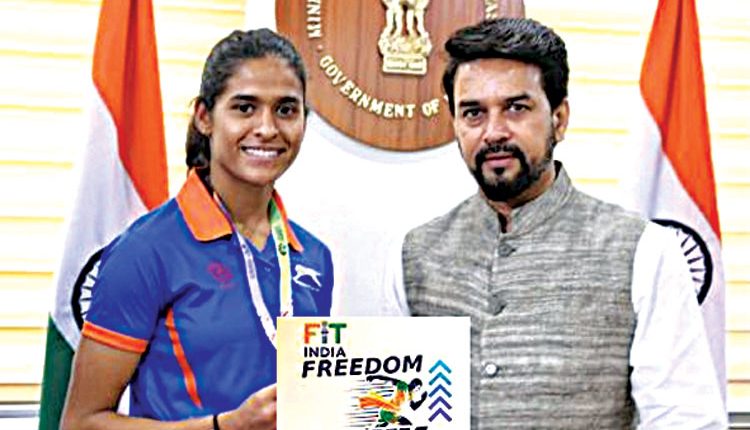 New Delhi, Aug 26 (Bureau) Sports Minister Anurag Singh Thakur will launch the Fit India mobile application on Sunday to celebrate second anniversary of Fit India Movement and as part of ‘Azadi ka Amrit Mahotsav’. The launch will take place at Delhi’s iconic Major Dhyan Chand National Stadium where he will be joined by Minister of State, Ministry of Youth Affairs and Sports Nisith Pramanik. Both ministers will virtually connect with Indian hockey team captain Manpreet Singh, wrestler Sangram Singh, Ayaz Memon, captain Anny Divya, a school student, and a housewife who in turn will demonstrate by using the Fit India app after the launch.

”The Fit India App will be available on both the Android and the iOS platforms and has been developed keeping in mind that it works even on basic smartphones,” a release said. ”One can watch the launch ceremony Live on Fit India’s Facebook page and download the app for free from the Google Play Store or Apple App Store from August 29th onwards,” it added. The Fit India Movement was launched on August 29, 2019 by the Prime Minister Narendra Modi with the vision of making India a fit and healthy nation. Over the past two years, the Movement has reached millions of people across the country via its various fitness campaigns such as Fit India School Week, Fit India Freedom Run, Fit India Cyclothon, and many others. Currently, the Fit India Movement is also conducting Fit India Freedom Run 2.0 in celebration of ‘Azadi Ka Amrit Mahotsav’ – an initiative of the central government to celebrate and commemorate 75 years of India’s Independence.