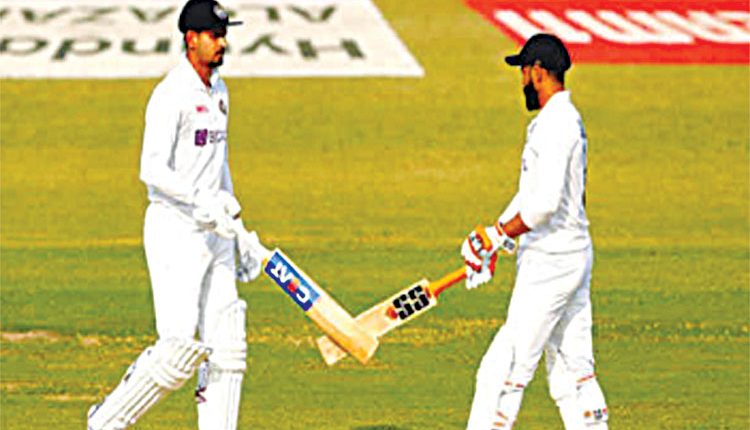 Kanpur, Nov 25 (FN Agency) Unconquered half-centurions Shreyas Iyer and Ravindra Jadeja resisted Kayle Jamieson’s strikes and helped India reach 258 for 4 at stumps on Day 1 of the first Test match against New Zealand at Green Park in Kanpur on Thursday. Shreyas and Jadeja are batting at 75 and 50, respectively, and they have put on a partnership of 113 for fifth wicket. Both were at ease facing spinners and pacers in tandem and succeeded in plundering more than four runs an over in the final session. Shreyas, who had the honours of receiving the India cap from cricket maestro Sunil Gavaskar on his debut, was the second Indian batsman of the day to get to the half-century. Soon after, Jadeja reached to his fifty with a flurry of boundaries of the second new ball. Both ensured that the hosts did not loose any further wicket before the umpires called off the day due to bad light after 84 overs. Shreyas, however, began in a nervy fashion as he got away with an audacious shot to get off the mark on debut, but managed to settle down ever since.

He also survived a review close to tea as he got hit on the back pad playing inside the line to spinner William Somerville. India should be pretty happy, especially after Jamieson wreaked havoc and reduced the hosts to 145 for 4. Captain Ajinkya Rahane (35) opted to bat with the new ball doing a bit for Tim Southee and Jamieson. Jamieson, in particular, was a tough customer, but Shubnam Gill (52) faced the odds and notched up his 4th half-century just at the stroke of lunch. The tall and burly fast bowler came back again and immediately removed Shubnam, and then Rahane, after lunch. Southee picked Cheteshwar Pujara (26). New Zealand picked two spinners after Captain Kane Williamson saw cracked up pitch, but Ajaz Patel was off colour and adopted a leg-stump line than focusing on picking wickets. William Somerville was pretty decent, but did not trouble the batsmen, but on the whole, the pacers outsmarted the spinners. The Kiwis were absolutely missing Neil Wagner, who has 200 plus Test wickets against his name. Resuming after lunch, New Zealand got three big wickets and left India in a spot of bother at 145 for 4. In the very first over, Jamieson struck as he exploited the low bounce and done in Shubnam to a fuller ball that got a big inside edge onto his stumps.

Southee then got Pujara in a familiar type of dismissal. He drew the Indian vice captain to hang his bat outside off that went low behind the stumps to Tom Blundell. Jamieson got his third as Rahane chopped one on to his stumps. He had survived a caught behind appeal on review in just the previous ball. Earlier, Shubnam ‘s unbeaten 52 helped India reach 82 for 1 at lunch with Pujara batting on 15. Both had stitched a crucial unbeaten partnership of 61 for the second wicket after Jamieson removed Mayank Agarwal (13) early on. New Zealand had an exceptional start until the first drinks break. They could have had two wickets had they appealed for the LBW from Ajaz to Shubnam. Brief scores: India 258/4 (Shreyas Iyer 75, Shubman Gill 52, Ravindra Jadeja 50; Jamieson 3-47) vs New Zealand.

Need to encourage more girls to come forward in the field of technical education: President