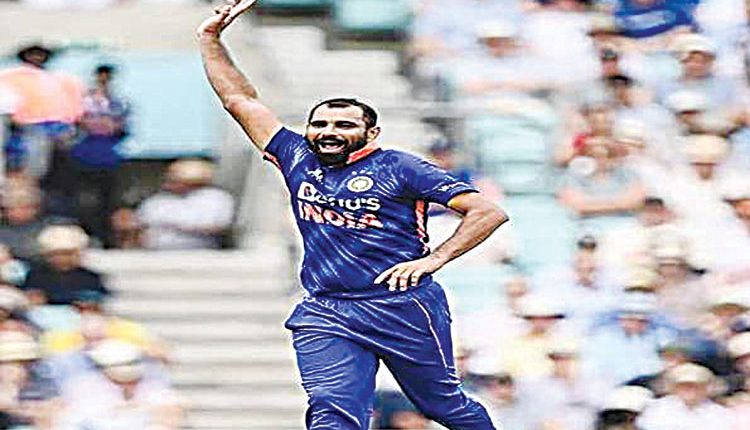 Mumbai, Oct 14 (Agency) The All-India Senior Selection Committee has named Mohammed Shami as Jasprit Bumrah’s replacement in India’s ICC Men’s T20 World Cup squad.Shami has reached Australia and will link up with the squad in Brisbane ahead of the warm-up matches.Shami was initially named amongst the three-man list of reserve players but has now been drafted into the main squad ahead of the tournament.India were dealt a huge blow ahead of the T20 World Cup with Bumrah ruled out due to a back injury. They have now opted for the experience of Shami for the marquee event set to get underway this weekend. Though Shami has not featured in T20Is since the last T20 World Cup, he played a crucial role in Gujarat Titan’s triumph in their maiden season in the Indian Premier League (IPL). He was thesixth-highest wicket-taker in the tournament with 20 wickets in 16 games at an economy of 8.

Deepak Chahar, who was initially named in the reserves, too did not make the flight to Australia because of a back injury. India have named two players – Mohammed Siraj and Shardul Thakur –in the reserves alongside Shreyas Iyer and Ravi Bishnoi. The three players have already flown to Australia and have linked up with the squad.Squad: Rohit Sharma (c), KL Rahul, Virat Kohli, Suryakumar Yadav, Deepak Hooda, Rishabh Pant, Dinesh Karthik, Hardik Pandya, R Ashwin, Yuzvendra Chahal, Axar Patel, Bhuvneshwar Kumar, Harshal Patel, Arshdeep Singh, Mohammad Shami. Standby Players: Mohammed Siraj, Shreyas Iyer, Ravi Bishnoi, Shardul Thakur.Besides Bumrah and Chahar, India will also be without the services of Ravindra Jadeja whomissed out due to a knee injury he sustained during the 2022 Asia Cup in the UAE. India’s T20 World Cup campaign begins with the highly-anticipated clash against Pakistan on Sunday, October 23 at the Melbourne Cricket Ground. India are pitted against Pakistan,Bangladesh and South Africa in Group 2 of Super 12. They will be joined by two more teamsfrom Round 1 of the tournament that kicks off on October 16.

Sri Lanka will be a threat & will take a lot of confidence in T20WC: Gambhir

‘India can hopefully get another Gopichand in next 2 years’