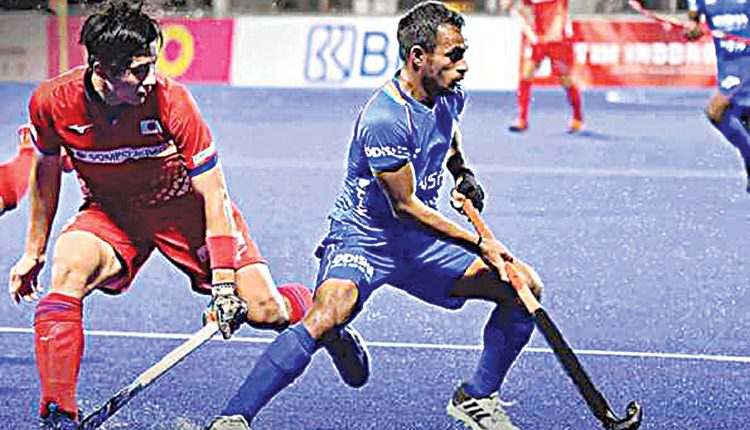 Jakarta, May 24 (FN Agency) An inexperienced second-string Indian side have almost been knocked out of the Hero Asia Cup tournament after they lost to a resilient Japan by a wide margin of 2-5 at the state-of-the-art GBK Sports Arena here on Tuesday. Having drawn against Pakistan in the opener, India’s chances after this defeat will depend on the clash between Japan and Pakistan, and a big win against Indonesia in their last group match to qualify into the knockout stages. Right from the first quarter, Japan kept things going as both the teams failed to find the breakthrough in his period. In the second quarter, Japan took a crucial 1-0 lead as India missed twice.

They kept the pressure on India and earned another penalty corner. This time they scored hrough Yamasaki Koji who struck at the bottom corner of the Indian goalpost. In a counter, India almost got one back as Raj Kumar Pal aimed at Japan’s goalpost inside the striking circle, but the shot went went wide of he target In the third quarter, Japan scored yet another goal. Kawabe Kosei penetrated inside the circle and managed to keep three Indian defenders engaged, while he raced past them to hit a superb goal, giving Japan 2-0 lead. India fought back right in the dying moments when captain Birendra Lakra provided an excellent ball inside the circle, which was converted by Pawan Rajbhar as the third quarter came to an end with India trailing 1-2. Japan extended their lead further in the fourth quarter as two of their forwards faced the Indian goalkeeper, but Ooka Ryoma comfortably finished the goal, helping Japan to take 3-1 lead over India. India kept themselves alive as Rajbhar penetrated inside the circle from the right flank and passed the ball towards Uttam Singh, standing right in front of the goalpost. Singh made no mistake and it was a simple tap in for the Indian which helped India reduce the goal margin 2-3. With just over seven minutes remaining in the match, India went two men down. First it was Rajbhar who was shown the green card and then Karthik Selvam, who was shown a yellow card. Japan used these absences to heir the advantage and extended their lead to 4-2 via Yamasaki Koji. It ook no time for Kawabe Kosei to score the fifth goal for Japan.