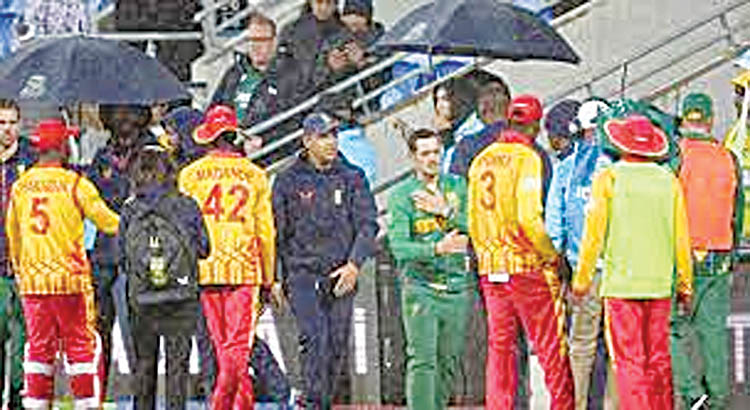 Hobart, Oct 25 (Representative) South Africa and Zimbabwe had to satisfy themselves with sharing points as their Super 12 encounter at the Bellerive Oval here didn’t yield any result, with rain causing frequent interruptions and delays. At first, the match was reduced to nine overs per side due to frequent interruptions caused by rain. Even though it kept drizzling lightly, the match went on fine until the first over of the South African innings. Zimbabwe scored 79/4 in their nine overs and the Proteas were set a DLS target of 85 to chase down in their quota of nine overs initially, but that was reduced to 64 from seven overs after the interruption, ICC reported. South Africa kept cruising towards the target, but the match couldn’t resume again when rain caused another interruption after the third over. It was left-arm pacer Wayne Parnell who triggered the collapse with Zimbabwe skipper Craig Ervine’s wicket in the second over of the innings.

But the real damage was done by Lungi Ngidi who got rid of Regis Chakabva and the in-form Sikandar Raza in the very next over, with just 12 runs on the board. The situation became worse for Zimbabwe when David Miller sent Sean Williams back to the dugout with a superb run out. Zimbabwe were staring down the barrel at 19/4 but Wesley Madhevere played a superb knock of an unbeaten 35 from just 18 deliveries to help his team to a competitive total of 79/4. Madhevere added 60 runs for the fifth wicket with Milton Shumba, who supported him well with an individual contribution of 18 from 19 deliveries. De Kock realised the necessity to press on the accelerator with rain-threat looming large and he started going on the charge from the very beginning as he smashed Tendai Chatara for 23 runs in the first over of the innings. He didn’t stop there and continued playing his shots all around the ground. Even the interruptions caused by rain didn’t break his rhythm as he looked in sublime touch. Unfortunately, he had to stay stranded on an unbeaten 47 from 18 deliveries as the officials had to call off the match with South Africa needing just 13 runs in four overs.