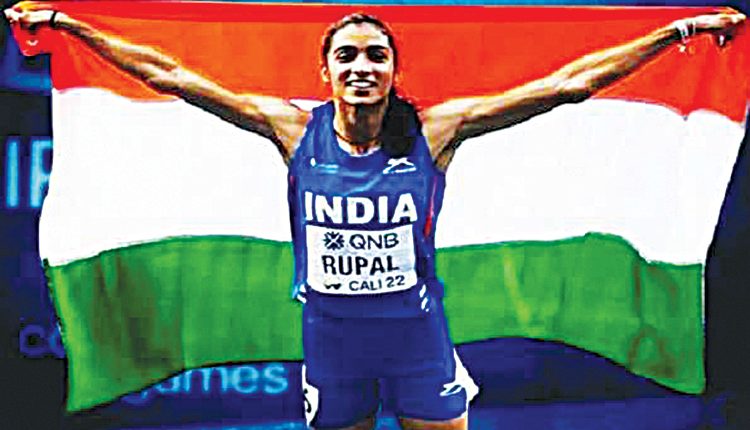 Cali, Aug 5 (Agency) Rupal Chaudhary, daughter of a small-time farmer from Uttar Pradesh, made India proud by becoming the first Indian athlete to bag two medals at the World U20 Athletics Championship here. She won silver and bronze in 4x400m relay and women’s 400m events, respectively on Thursday. Rupal clocked 51.85 seconds to finish third behind Yemi Mary John (51.50) of Great Britain and Damaris Mutunga (51.71) of Kenya on Thursday night. Rupal has been in great form. Earlier this year, she had pipped women’s 400m favourite Priya Mohan of Karnataka at the National U20 Federation Cup Athletics Championships.

India are joint 17th in the medal table alongside Eritrea. Ahead of the 400m race, all the focus was on favourite Yemi, but the experts and the spectators did not quite know Rupal’s achievements back in India. Running in lane three, Rupal caught the attention of the onlookers within seconds after the trigger went off in the air as Rupal sprinted ahead and remained there right until the straight track where she conceded to Yemi who clocked a personal best of 51.50 seconds. Damaris Mutunga of Kenya won silver clocking 51.71s. “Today I came with an aim to run and win for my country. I put in all my energy and made a podium finish,” Rupal said after winning the bronze medal. “I did not want to miss the opportunity as it was my last run in the individual event here. I wanted to make it memorable, especially after winning silver in the mixed team relay,” she said. Rupal said she just focused on her speed and did not care about other athletes. Getting emotional, she said she was happy that she could fulfil the promise given to her father Omveer Singh who was against her taking the sport initially due to the 18 kms distance she had to travel everyday. She used to travel from her village to Kailash Prakasam Stadium in Meerut. “Only a three-day hunger strike could force my father to take me to the stadium,” she said.

Rupal is the second Indian to have won a medal in the women’s 400m after Hima Das clinched a historic gold in the 2018 edition of the championships in Finland with a time of 51.46s. Olympic champion javelin thrower Neeraj Chopra was the first Indian to win a gold in the championships in 2016 in Poland. Initially she focused on 100m and 200m, but her coach Vishal Saxena, a silver medallist in South Asian Games (2006) in 200m and gold medallist in 4x100m, cajoled her to concentrate on 400m more seriously. “Words are falling short to describe how happy I am with her consistency. It is just the beginning. I am sure many more feats are awaiting her,” Saxena said.