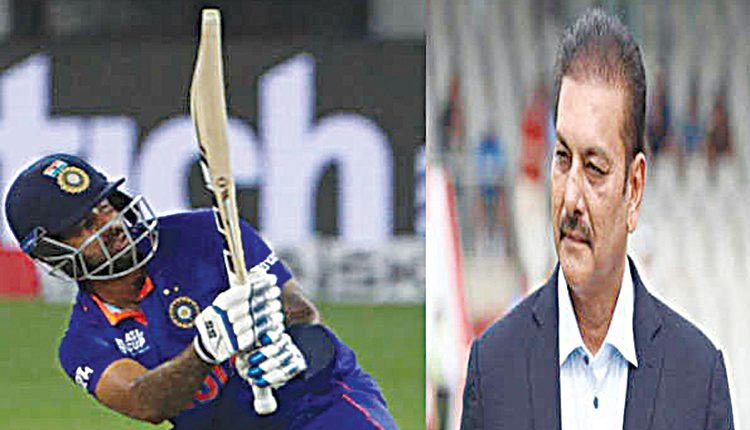 Adelaide, Nov 2 (Agency) Former India coach Ravi Shastri believes the remarkable rise of Suryakumar Yadav to become the No.1 T20I batter ranking is just the tip of the iceberg and the dashing right-hander can thrive in all three formats of the game.Yadav capped off an incredible recent run on Wednesday when he overtook Pakistan opener Mohammad Rizwan to become just the second India player to hold the top T20I batter ranking.What makes Yadav’s feat so amazing is that he didn’t play a T20I for India until March last year and has quickly amassed one century and 11 half centuries from 37 appearances for his country in the shortest format. Yadav has also played 13 ODI matches for India – with mixed success – and Shastri thinks it’s onlya matter of time before the 32-year-old gets the chance to show his wares in Test cricket. “He can play all three formats of the game and the reason I say that is that he is different,” Shastri said in Adelaide ahead of India’s clash against Bangladesh at the ICC T20 World Cup.

“You don’t get too many players who can hit spots the way he does,” he said.”He hits it into unusual areas he gets into unusual positions and it is literally a challenge to thebowler as to where he can bowl,” Shastri said. “His great ability is to read what length the bowler is bowling, he anticipates early and he backs himself and very few players go out with that kind of mindset,” he said. Yadav’s rise to the top ranking comes on the back of an outstanding start to the ICC Men’s T20 World Cup, where the aggressive right-hander has hit consecutive half centuries against the Netherlands and South Africa. Shastri was impressed with the way Yadav adapted to the conditions India faced against South Africa in Perth and was full of praise with the way he nullified the Proteas’ powerful fast-bowling attack. “He is lighting up this World Cup and he is playing shots which 10 years ago no one would have imagined,” Shastri noted. “The way he used that pace and bounce in Perth. He sussed the conditions, and it suited his game and I think his eyes will light up every time he goes to play in Australia as there is pace, there is bounce, and he likes to use the pace and bounce,” he said.And while the likes of former skipper Virat Kohli and current captain Rohit Sharma remain two of India’s biggest names, Shastri thinks it won’t be long before Yadav joins them. “There will be a lot of youngsters wanting to emulate him,” Shastri said.”Just watching the way he moves and the areas he tries to hit…he is a proper 360 degree player,”he said. “He is someone who can puncture any part of the ground,” Shastri added.