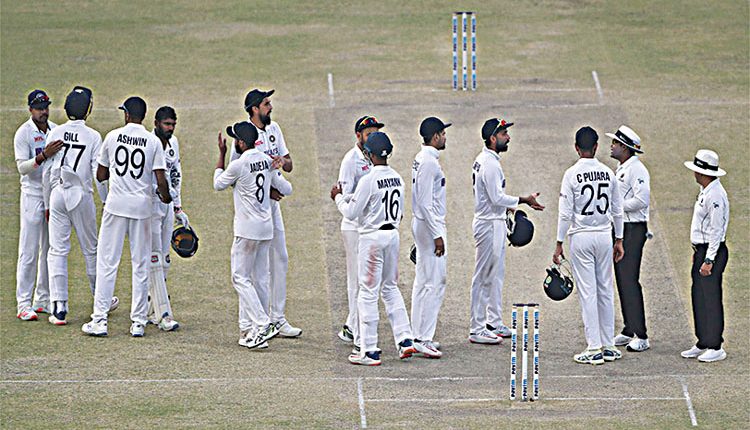 Kanpur, Nov 29 (FN Agency) New Zealand’s Rachin Ravindra and Ajaz Patel on Monday denied India a win in the first Test at Green Park Stadium here as it all ended in a nail-biting draw. Tailenders Ravindra and Ajaz survived 52 balls to save the Test for New Zealand after the Kiwis were staring at a defeat at 155 for 9. Debutant Rachin played an unbeaten knock of 18 runs, facing 91 balls. For India, Ravindra Jadeja bagged four wickets and Ravichandran Ashwin scalped three, as the spinner went past Harbhajan Singh’s record of being third highest wicket-taker for India. Ashwin is now behind Kapil Dev and Anil Kumble. Axar Patel and Umesh Yadav also chipped in with one wicket each. India pushed really hard for victory, but light played spoilsport denying the 12-13 minutes of play left in the day. Umesh Yadav opened the floodgates, post lunch with his first ball bouncing dogged William Somerville out. Only Kane Williamson (24) and Rachin got into double figures after losing the nightwatchman as Ashwin, Jadeja and Axar ran riot. India did start the final session by getting quick wickets, but it was not enough under diminishing light towards the fag end.

Chasing the target of 285, opener Tom Latham (52) stood strong till Tea, but his colleagues struggled to stay with him on the pitch as India’s spinners got wickets at intervals. Earlier, India in the first innings managed to score 345 thanks to Shreyas Iyer’s debut century and fifties from Ravindra Jadeja and Shubnam Gill. Tim Southee bagged 5 for 69, while Kyle Jamieson managed 3 wickets for 91 in the first innings. The Kiwis were bundled off at 296 as Axar grabbed five wickets, while Ashwin got three wickets in their kitty. In India’s second innings, Iyer and Wriddhiman Saha cracked fifties as hosts tightened the noose around the visitors in the second innings as they set New Zealand a target of 285 after declaring at 234 for 7. Jamieson and Southee scalped three wickets each. Going wicketless in the first session on Monday, India did well to pick three wickets in the second, giving themselves a window of opportunity of bowling New Zealand out. The Indian spirits were lifted after Umesh Yadav struck in the very first ball of the second session, ending Will Somerville’s gritty knock of 36 off 110 balls with the short ball from round the stumps. The Indian think tank on the pitch would have noticed the nightwatchman’s weakness in dealing with the short balls, and eventually they scalped his wicket, but not before Shubnam Gill held onto a fine running catch from fine leg. Kane Williamson (24) joined Tom Latham (52) and smothered the Indian attack, though initially the Kiwi captain showed the intention of going after the target as he played a lofted shot of Axar and a sumptuous cover drive off Ishant Sharma. Latham lost his focus, most probably after a long vigil at the crease as he tried to cut Ashwin, but chopped one onto the stumps.

The opener brilliantly used his crease, by batting from the depth, negotiating good length balls of Indian pacers and sweeping courageously the seasoned spinners. Captain Ajinkya Rahane brought on left-arm orthodox spinners, Jadeja and Axar, from both ends, knowing fully well that Ross Taylor (2) is wary about them. At the stroke of Tea, Taylor missed the slider from Jadeja and was trapped in front. Taylor’s wicket lifted India’s hopes again just before Tea, with the Rahane-led side hoping to get six wickets to win the Test with a minimum of 31.5 overs left. New Zealand were 125 for 4 at Tea. India walked into the first session with hopes of making early inroads that did not materialise. Somerville and Latham frustrated the hosts as they adapted well to the slow nature of the pitch and waded through the first hour.

redBus forays into railway ticketing with redRail in association with IRCTC