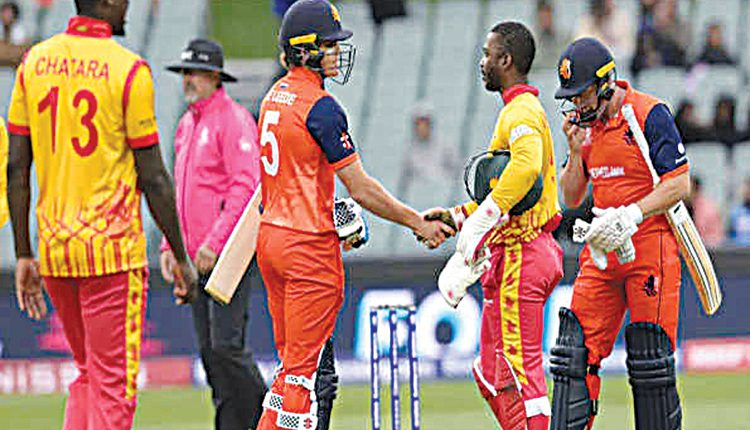 Adelaide, Nov 2 (Bureau) The Netherlands have ended Zimbabwe’s hopes of reaching the semi-finals at the ICC Men’s T20 World Cup by clinching a five-wicket victory over the African side in Adelaide on Wednesday. The Dutch have already produced many highlights this tournament, but their efforts against Zimbabwe may have been close to their most complete performance thus far as they cruised to victory on Adelaide Oval. Paul van Meekeren (3/29) and fellow seamer Bas de Leede (2/13) were the pick of the bowlers as Zimbabwe were all out from 117 in their final over, and their run chase was a mere procession asthey found the victory target with ease. Max O’Dowd (52 off 47) and Tom Cooper (32 off 29) were the mainstays of the chase as they combined to put on 73 for the second wicket as the Netherlands eased to their first win of theSuper 12 stage with two overs remaining. O’Dowd has been of the most impressive performers of the T20 World Cup thus far, with the Netherlands opener having amassed the most runs of anyone at the tournament thus far with213 runs from seven innings. Cooper’s T20 World Cup had been in complete contrast leading into Wednesday’s match, withthe Australia-born veteran having scored just 40 runs from six knocks prior to the clash.

But batting on a ground he would have had plenty of experience playing on with Australian domestic side South Australia, Cooper showed his class with a valuable knock at the top of the order.Veteran all-rounder Sikandar Raza played a lone hand for the African side, with the 36-year-old smashing a quickfire 40 from just 24 deliveries to provide some momentum for Zimbabwe throughthe middle overs. But Fred Klaassen held on to a good to a good catch in the outfield when Raza was attempting tohit his fourth six as wickets continued to fall in quick succession.Experienced batter Sean Williams (28) was the only other Zimbabwe player to score in doublefigures and their total was well below par on a wicket that appeared good for batting. The loss ends Zimbabwe’s chances of featuring in the semi-finals at the tournament, with Craig Ervine’s side now needing to regroup ahead of a difficult match-up against India in Melbourne on Sunday. While the Dutch were already out of semi-final contention heading into Wednesday’s match, theywill get the chance to make it consecutive victories to end the tournament when they take onSouth Africa in Adelaide on Sunday.Zimbabwe: Craig Ervine (c), Wesley Madhevere, Milton Shumba, Sean Williams, Sikandar Raza, Regis Chakabva (wk), Ryan Burl, Luke Jongwe, Richard Ngarava, Tendai Chatara, Blessing MuzarabaniNetherlands: Max O’Dowd, Stephan Myburgh, Tom Cooper, Colin Ackermann, Bas de Leede, Scott Edwards (c & wk), Roelof van der Merwe, Logan van Beek, Fred Klaassen, Paul vanMeekeren, Brandon Glover.