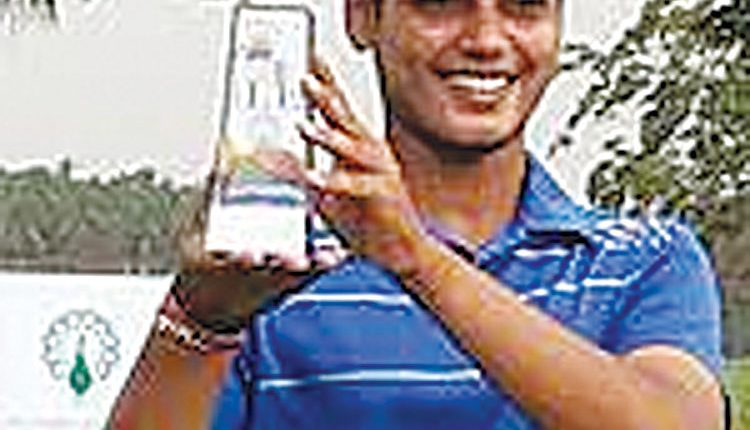 Vikarabad (Telangana), Nov 26 (FN Agency) Manu Gandas of Gurugram shot a resolute five-under 67 in the penultimate round to regain the advantage at the inaugural Dream Valley Group presents Vooty Masters, a Rs. 1 crore event being played at the Vooty Golf County here on Saturday. Manu (63-68-67), the first round leader, who had slipped into second place on day two, now enjoys a slender one-shot lead at a total of 18-under 198. Gandas, currently placed second on the PGTI Order of Merit, thus raised his hopes of bagging his fifth title this season which would see him equal the PGTI record for most wins in a season currently held jointly by Yuvraj Singh Sandhu (2022), Gaganjeet Bhullar (2009) and Ashok Kumar (2006-07). Manu is now also in with a good chance of wresting the Order of Merit lead from Yuvraj Singh Sandhu. Chandigarh’s Angad Cheema (65-67-67), who was overnight third, moved into second position at 17-under 199 after he too shot an equally impressive 67 on day three. Mhow-based Om Prakash Chouhan (66-63-73), the second round leader, carded a sedate 73 on Saturday to drop down to third place at 14-under 202.

The 26-year-old Manu Gandas, who set the course record of 63 on day one, had a steady front-nine in round three making three birdies and a bogey. Manu’s birdies on the front-nine included a good up and down from the bunker on the fifth and a drive that found the par-4 seventh green. He drove the seventh green for the second day running. Gandas, who has five career titles on the PGTI, then collected four birdies and a bogey on the back-nine to move to the top. Manu picked up strokes on the 12th and 16th to score birdies on all the four par-5s. He left himself a four-footer on the 13th and drove past the green on the par-4 15th to claim his other two birdies on the back-nine. He closed the round with an 18-feet conversion for a tremendous par save on the 18th. Manu, the top contender going into round four, said, “My driving and tee shots were the best part of my game today. I drove two par-4 greens today and took advantage of all the par-5s.

I would say my iron-play was not up to the mark and I made some errors that could’ve been easily avoided. Angad Cheema, currently 24th on the TATA Steel PGTI Rankings with three top-10s this season, will be the other main contender in the final round as he kept himself in the hunt with seven birdies and two bogeys on Saturday. Angad, who sank five of his birdies on the back-nine, made some exceptional chip-putts during round three. Cheema, whose only win on the PGTI came in his rookie season back in 2013, said, “It was not one of my best days but I’m glad that I still managed to keep myself in contention. I got some momentum on the back-nine today which I will look to carry forward into the final round.” Delhi’s Harshjeet Singh Sethie (68) and Noida’s Gaurav Pratap Singh (69) were placed tied fourth at 13-under 203. Ajeetesh Sandhu (70), one of the top names in the field, was tied 18th at seven-under 209. PGTI Order of Merit leader and five-time winner this season Yuvraj Singh Sandhu (73), was tied 29th at five-under 211. Fifteen-year-old Noida-based amateur Aarav D Shah (69), an Australian national, was placed tied 33rd at four-under 212.