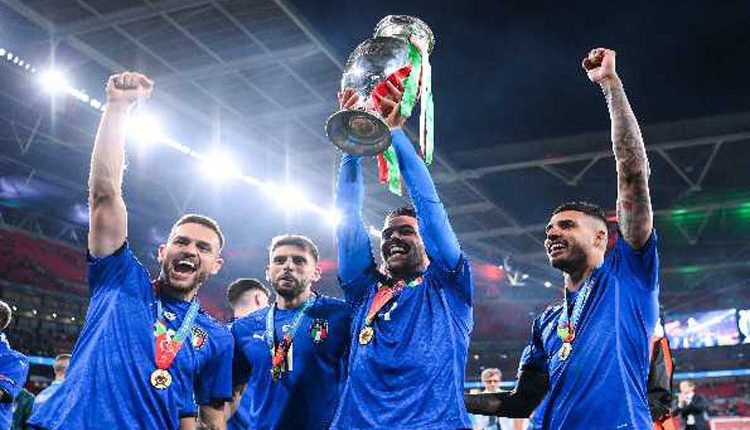 London, Jul 12 (Agency) Italy won the 2020 UEFA European Football Championship by beating England 3-2 on penalties in final, following the 1-1 draw after 90 minutes and extra time at Wembley Stadium on late Sunday night. The Azzurri won the Euro 2020 tournament for the second time on Sunday. The first time that the Italian national team won the continental title was in 1968. It played in the finals in 2000 and 2012, but lost to France and Spain, respectively.

England took the lead with a Luke Shaw strike in the 2nd minute, the quickest ever goal in an Euro final. Italy, unbeaten in 33 matches before this final, slowly edged their way back into the game and were level in the 67th minute when Leonardo Bonucci pounced after England goalkeeper Jordan Pickford turned Marco Verratti’s header on to a post. From there on, England struggled to find their composure but managed to hold on to take the game to extra time and, after another nervous 30 minutes, penalties were needed to separate the two sides. Marcos Rashford, Jaydon Sancho and Bukayo Saka missed the vital penalties for England. Harry Kane and Harry Maguire were on target for England while Pickford kept hopes alive with saves from Andrea Belotti and Jorginho while Domenico Berardi, Bonucci and Federico Bernardeschi scored for Italy.

It was only the second European Championship final to be decided by spot-kicks and Italy who came out on top as England’s incredible run at the tournament fell just short. The goalkeeper of the Italian national team, Gianluigi Donnarumma, was declared Player of the Tournament after he saved two hits in the penalty shootout. The final at Wembley was the tournament’s most attended match with 67,173 fans present at the game. This year, the UEFA European Football Championship was held across the continent for the first time in its 60-year history, with 11 host cities in all: London, St. Petersburg, Baku, Munich, Rome, Amsterdam, Bucharest, Budapest, Copenhagen, Glasgow and Seville.