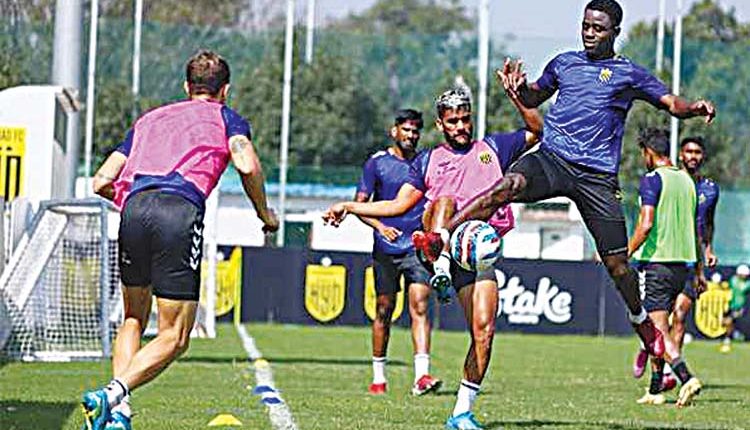 Hyderabad, Nov 4 (FN Agency) Hero Indian Super League defending Champions and current season’s league leaders Hyderabad FC are back in action when they take on the in-form Odisha FC in a Saturday evening thriller at the GMC Balayogi Athletic Stadium, in Gachibowli this weekend. HFC are fresh from three back-to-back wins, two of them at the Maidaan in Hyderabad, and are currently at the top of the league table with 10 points from their first four games.Odisha FC, who beat Kerala Blasters and Bengaluru FC in their previous two encounters, have a chance to go atop of the ISL table, with a win in this tie.Josep Gombau’s side have put on a show this season, with goals coming in from all around the field. Carlos Delgado, Saul Crespo, Jerry Mawihmingthanga, Diego Mauricio and Nanda Kumar have been in fine form so far while the likes of Pedro Martin, Amrinder Singh and Thoiba Singh have also been at the top of their game, making Odisha one of the strongest sides in the competition this season. HFC Head Coach Manolo Marquez believes that this game will be a tough challenge for his side. “Odisha are tactically strong and a complete team. They will come here to attack and try to win the game but we are a team that wants to win as well and I think this will be a really good game for the crowd,” said the Spaniard.

Hyderabad FC, the current league leaders, beat NorthEast United in their only away game, and backed it up with consecutive 1-0 wins over Bengaluru FC and FC Goa at home in the last two outings.Bartholomew Ogbeche, Javier Siverio, Halicharan Narzary, Joao Victor and Borja Herrera have already been among the goals while Mohammad Yasir has been deadly with the ball at his feet all season. The backline of Odei Onaindia, Chinglensana Konsham, Akash Mishra and Nikhil Poojary have helped Laxmikant Kattimani keep three consecutive clean sheets. HFC can open an early gap at the top of the league table with a positive result in this game and Manolo Marquez believes his side are ready for this clash. “It is always good to have options to choose your Starting XI. But a lot depends on the quality of the opposition. Odisha are a tough side to beat but we have proven that we can win difficult games and tomorrow, we will be ready for this clash,” added Manolo. Hyderabad will look to register four consecutive wins for the first time in their history, and will have the noisy Gachibowli Stadium pushing them on. Manolo Marquez has not lost to Odisha in his time in India but his side will be up against an in-form team this weekend, in a game that promises to go down to the wire. The game kicks-off at 5.30 pm on Saturday and will be telecast live on the Star Sports Network with live streaming on Disney+ Hotstar and JioTV.