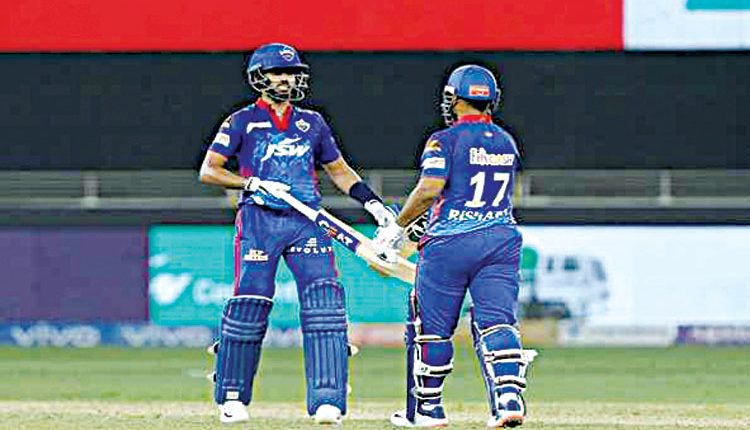 Dubai, Sep 22 (Agency) Disciplined bowling efforts by Kagiso Rabada (3 wickets) and Anrich Nortje (2 wickets) and determined batting performance by Shreyas Iyer (47 not out) and Shikhar Dhawan (43) helped Delhi Capitals (DC) defeat Sunrisers Hyderabad (SRH) by eight wickets while chasing 135 runs in match 33 of Indian Premier League (IPL) 2021, here on Wednesday. Delhi, which was playing their ninth game of the season today, go top of the table with 14 points; surpassing MS Dhoni-led Chennai Super Kings (CSK) (12 points in 8 matches). Hyderabad continue to languish at the bottom of the eight-team points table with their seventh loss of the season in eight games. Asked to bowl first, Delhi’s Nortje (2/21) and Rabada (3/32) did most of the damage to restrict SRH at 135/9. In response, DC chased down the target in just 17.5 overs. Opener Dhawan (42 runs off 37 balls) steered Delhi’s run chase by being the aggressor in a 52-run second-wicket stand with captain Iyer after Prithvi Shaw fell to Khaleel Ahmed for 11.

Dhawan smashed six boundaries and a maximum before miscuing a Rashid Khan flipper to Abdul Samad at fine-leg. With the scoreboard reading 72/2 (11.5 overs), Iyer joined hands with Rishabh Pant for an unbeaten 63-run partnership to ensure a safe passage to win. Iyer finished off the match with a towering six to remain not out on 47 off 41 after Pant took on SRH bowlers with a quickfire 21-ball 35*. Earlier in the first innings, SRH found it hard to open up their arms in the powerplay with Nortje and Rabada removing openers David Warner (0 run off 3 balls) and Wriddhiman Saha (18 off 17) respectively by the end of the fifth over. With just 29 runs on the board, captain Kane Williamson (18 off 26) and Manish Pandey (17 off 16) tried rebuilding the innings with a steady 35-ball 31 stand. However, the hard work was undone when the duo perished in successive overs to leave SRH stuttering at 61/4.

Spinner Axar Patel oversaw the soft dismissal of Williamson in the ninth over while Pandey fell to Rabada in the next. Nortje then claimed his second victim of the night in Kedar Jadhav (3 off 8) as half of the SRH team was back in the dugout after adding mere 75 runs in 13 overs. 15 runs later, Patel outfoxed Jason Holder (9 off 10) to further pile on SRH misery. Pinch-hitter Abdul Samad (28 off 21) Rashid Khan Khan (22 off 19) added some semblance to the SRH total by taking the score past 130 before the Kashmiri-born Samad was dismissed by Rabada in the 19th over. Pant then inflicted two run-outs — of Rashid and Sandeep Sharma (0 off 1) — to restrict SRH at 134/9.