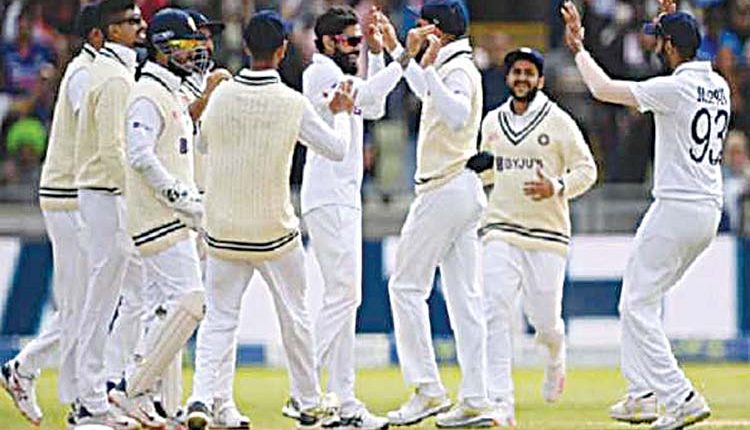 Mumbai, Aug 17 (Agency) India will play two five-Test series each against Australia and England during the International Cricket Council (ICC) Men’s Future Tours Programme (FTP) for the period 2023-27 that was confirmed on Wednesday.The announcement of the FTP, a result of a collective effort of Full Members with ICC’s support, ensures certainty of cricket fixtures with the confirmation of all bilateral series across the three formats. The exact dates of the series are for the Members to announce in due course.India kick off their engagements for the next cycle with a tour of the West Indies in July next year, when they play two Tests, three ODIs and three T20Is. After hosting Australia for limited oversseries, India will embark on their next full tour in December 2023 to South Africa.India, who finished runners-up to New Zealand in the first ICC World Test Championship that ranfrom 2019-21, play the first of their four five-Test series against England at home starting January 2024. They play Australia in an away series from November that year to January 2025, England ina series starting June 2025 and again versus Australia at home in January-February 2027.

Afghanistan, who debuted in Tests in Bengaluru in June 2018, will be hosted again by India in the coming FTP cycle as they are pencilled to play one Test and three ODIs in mid-2026.India are also committed to playing other limited overs series against Australia, England, New Zealand, Sri Lanka and the West Indies over the next four years apart from matches that are partof the two WTC cycles falling in this period.WTC series: India’s WTC fixtures for the 2023-25 series comprise home series against Bangladesh, England and New Zealand and away series in Australia, South Africa and the West Indies. In the 2025-27 WTC, they are scheduled to play Australia, South Africa and the West Indies at home, while their away series will be in England, New Zealand and Sri Lanka.The announcement of the Men’s FTP comes a day after the first ever Women’s FTP was announced.ICC GM of Cricket Wasim Khan said, “I’d like to thank our Members for the effort that has gone into creating this FTP for the next four years. We are incredibly lucky to have three vibrant formats of the game, with an outstanding programme of ICC global events and strong bilateral and domestic cricket and this FTP is designed to allow all cricket to flourish.“

The landscape around the game is continuing to evolve and we will work closely with Members as we collectively adapt to that. We are committed to growing the game and giving more fans more opportunities to enjoy cricket, but are very mindful of the need to balance that ambition with the welfare of players.”Jay Shah, Secretary, BCCI, said: “I want to take this opportunity to congratulate all my colleagues at the CEC for the historic Women’s FTP – the first of its kind and the continued spirit of partnership to conclude the Men’s FTP which provides certainty to all the members to develop their cricketing eco-systems as well as commercial programmes around their own calendars.”