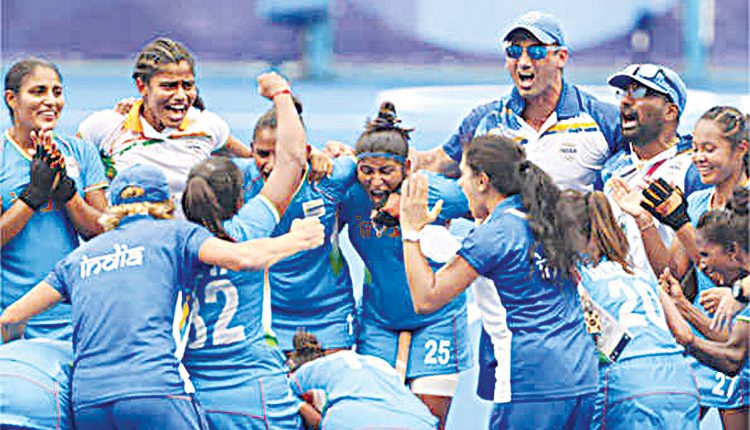 Tokyo, Aug 2 (FN Agency) Indian women’s hockey team on Monday scripted history by reaching their first-ever Olympic semi-final after beating World Number 2 Australia 1-0 in the quarter-final match here at the Oi Hockey Stadium. The Indian team were sublime in their attacking and defensive game as Gurjit Kaur (22) emerged as the only goal-scorer of the match. India’s best performance in the Olympics came way back in the 1980 Moscow Games where they finished fourth out of six teams, but the format was different, as there were no knockout games.

The sport was played in a round-robin format in the 1980 Moscow Olympics with top two teams qualifying for the final The Rani Rampal-led side will play against World Number 5 Argentina in the semifinal on Wednesday. Argentina defeated Germany 3-0 in the first quarter-final match. In the opening minutes of the match, Australia kept most of the ball possession and created a chance early on in the game, however, the Indian goalkeeper Savita kept the ball away from the goal. Moments later, the Indian team got close to the goal, but they couldn’t find the back of the net. In the 9th minute, Vandana Katariya made a brilliant pass to Rani in the circle, however, the latter couldn’t tap the ball into the goal. Australia made a few circle penetrations in the last few minutes of the first quarter, but they couldn’t find a way to break the deadlock. The two teams fought toe-to-toe against each other in the opening minutes of the second quarter. Australia made a circle penetration in the 6th minute of the second quarter and earned a Penalty Corner.

However, the Indian defence unit carried out a fantastic job and kept the Australians at bay. Moments later, India made a circle penetration and earned a Penalty Corner. Gurjit Kaur (22′) carried out the drag-flick and found the back of the net to help India take a 1-0 lead. Thereafter, Australia put some pressure on the Indian goal, however, the Indian defence stood tall and fought against everything the Australians threw at them. In the 11th minute of the second quarter, Salima Tete made a circle penetration and took a shot, but she looped the ball over the crossbar. Indian continued to put pressure on the Australians as the two teams went into the break with India leading at 1-0. The World Number 2 started the third quarter aggressively and kept trying to find a breakthrough, but the Indian defence stood tall and ensured that they stayed in the lead. In the 13th minute, Neha made a brilliant pass to Navneet in the circle, but the latter took a shot, but couldn’t find the back of the net.

Sharmila Devi drove the ball from the right in the final minutes of the third quarter, however, the Indians couldn’t deflect the ball into the goal. In the 7th minute of the fourth quarter, Australia earned two Penalty Corners, but the Indian defence made two brilliant saves and ensured that they stayed in the lead. The Australians kept pressing forward, kept making circle penetrations, but they just couldn’t find a way to breach the Indian defence. With just three minutes left on the clock, the Australians earned a Penalty Corner. They took a shot, but Monika calmly tapped the ball away from the goal. Australia earned another Penalty Corner soon after and got very close to the goal, but the Indians held their nerve and directed the ball away. The Indians kept most of the ball possession in the final minutes of the match and ensured that they booked a place in the semi-finals.