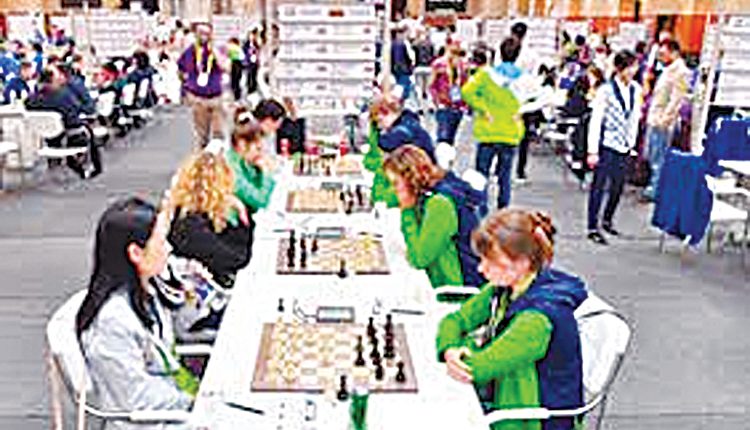 Mamallapuram, Aug 5 (Representative) India’s juggernaut rolled on as the Women’s A team notched up their seventh successive victory against sixth seeded Azerbaijan 2.5-1.5 score to maintain their sole lead with 14 points at the 44th Chess Olympiad here on on Friday. India A, though, suffered a few hiccups after Humpy ended on the losing side in the first game. However, Tania Sachdev and R Vaishali again rose to the occasion magnificently by scoring hard fought victories while Harika Dronavalli also battled hard to split the point. Vaishali played splendidly in a drawn position, pressurising her opponent with precise positive play and finally scoring a delightful victory. Vaishali later said “Till the 40th turn, my game was dead equal and I considered settling for a draw. After Humpy’s loss, I had to keep pressing and interestingly, this was one position which we had worked in the camp with Boris Gelfand and I followed his suggestions to the ‘T’.”

A hall mark of the women’s A team has been the ability of every player to score a win when the team needed it most. “The way Harika, Vaishali and Tania continued in this pressure situation is very heartening. The players understand the situation perfectly and deliver,” India-A captain Abhijit Kunte said. Meanwhile in the open section, India-A stepped up the pedal when it mattered most, defeating fellow countrymen India C 3-1, in battle of equals. Arjun Erigaisi defeated Abhijit Gupta and S L Narayanan outplayed Abhimany Puranik even while Pnetala Harikrishna was held to a draw by Surya Shekhar Ganguly and SP Sethuraman forced Vidit to split the point. India B, after a loss to Armenia in the 6th round, bounced back with a 3.5-0.5 score against Cuba with D Gukesh leading from the front once again to notch up his seventh successive victory in the tournament. Nihal Sarin and R Praggnanandhaa too made merry with two fine victoriesm, while Adhiban B was held to a draw.

In another setback for the star-studded USA Team, Armenia held them to a 2-2 draw and continued their sole vigil at the top of the points tally with 13 points. India A and India B, USA , Uzbekistan are trailing behind with 12 points each. India B in the women section lost to Greece 1.5-2.5. Divya Deshmukh scored the lone victory for India while Vantika Agrawal and Soumya Swaminathan lost their encounters and Mary Ann Gomes had to stay content with a draw. India Women C team defeated Switzerland 3-1.

29,000 jobs posted in Kolkata, becomes most popular destination for SMBs and MSMEs