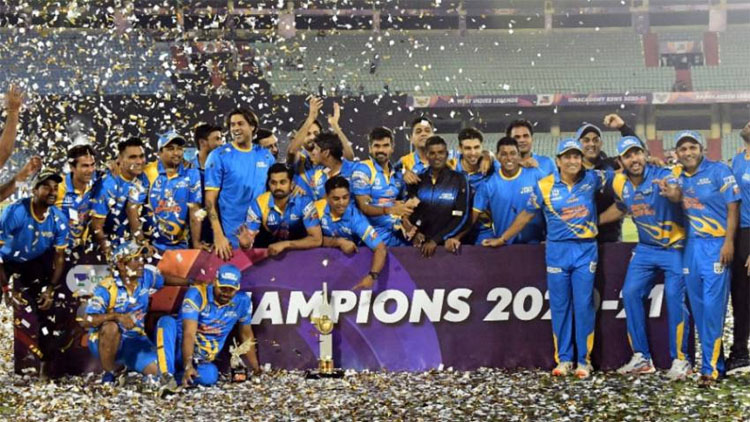 Raipur, Mar 22 (Agency) India Legends emerged champions in the first edition of the Unacademy Road Safety World Series T20 after beating Sri Lanka Legends by 14 runs in the final at the Shaheed Veer Narayan Singh International Stadium on Sunday night. In a repeat of the World Cup 2011 final versus Sri Lanka which the Men in Blue won under MS Dhoni, this win came under the captaincy of Sachin Tendulkar.

All-rounder Yusuf Pathan starred in the team’s victory with an unbeaten 62 and two wickets for 26 that restricted Lanka to 167/7 in 20 overs, chasing a target of 182. Sanath Jayasuriya scored the highest 43 while captain Tillakratne Dilshan failed to click this time, scoring just 21. Earlier, Yuvraj Singh and Yusuf went on a rampage by slamming half centuries to see India Legends put up a challenging total of 181 for the loss of four wickets in 20 overs.

Yuvraj got an entertaining 60 off 41 balls with four boundaries and as many sixes while Yusuf remained unbeaten on 62 in 36 balls with four hits to the ropes and five sixes. Other than the two big men, captain Tendulkar got a classy 30 which included five boundaries. For Lankans, none of the bowlers were impressive as Rangana Herath, Sanath Jayasuriya, Farveez Maharoof and Kaushalya Weeraratne took one wicket each. The tournament’s leading wicket-taker and Sri Lanka’s match-winner Dilshan returned empty handed, giving away 25 runs in two overs.

India got an unexpected slow start to the innings. They lost their first wicket in the third over itself. Virender Sehwag was bowled by Rangana Hearth while going for a big shot after hitting the left-arm spinner out of the park in the previous ball. In the next over, Tendulkar swept Dilshan for back to back boundaries, taking back the control before S Badrinath was out leg before wicket to the left-arm orthodox of Sanath Jayasuriya. Coming next, Yuvraj got a classy boundary on the on off Dhammika Prasad before the two went silent for the next few overs. Once Dilsan came in, Yuvraj smacked Dilshan for two sixes and by the end of 10th over India were 77 for two. In the 11th over, Maharoof got the scalp of Tendulkar who went for a lose shot that went into the hands of wicket-keeper Upul Tharanga.

Post Tendulkar’s wicket, the two big hitters went on a rampage where they executed some big shots whenever it was pitched in their zone that left Sri Lanka hapless and helpless. In the 16th over, Yuvraj and Yusuf hit Prasad for 22 that had two sixes and as many fours. Yusuf followed it with three sixes in the next over of Kulasekara. A while later Yuvraj was dismissed by Kaushalya Weeraratne in the 19th over, but it was enough for Yusuf with brother Irfan to take the team past 180.