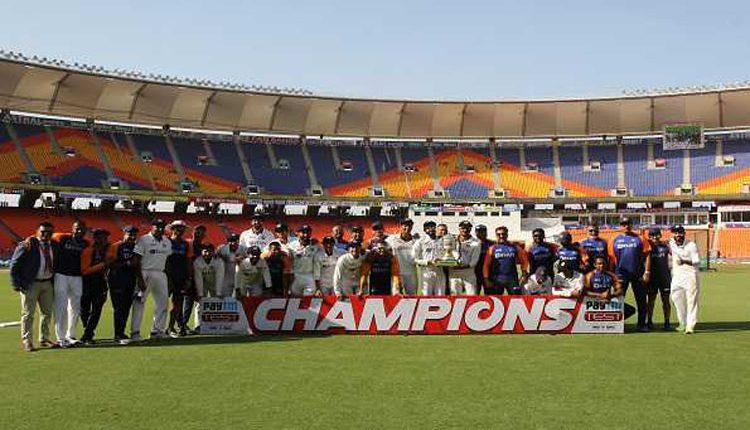 Ahmedabad, Mar 7 (Agency) India stormed into the inaugural World Test Championship Final (WTC) after thrashing England by an innings and 25 runs in the fourth and the final Test within three days, here at the Narendra Modi Stadium on Saturday. With this win, India also won the series 3-1. Now, India will face New Zealand in the Championship Final at Lord’s on June 18. The Virat Kohli-led side finished on top of the league phase of the ICC WTC standings with 520 points, followed by Kane Williamson’s New Zealand (420 points).

Indians spinners continued to torment the visitors, as Axar Patel (5/48) and Ravichandran Ashwin (5/47) shared 10 wickets between them in the England’s second innings. England were bundled out for 135 runs in just 54.5 overs. They needed to score more than 160 runs to make India bat again in the game. Earlier, in reply to the visitors’ paltry 205 runs, India took a healthy lead of 160 runs when they scored 365 runs, courtesy young wicket-keeper batsman Rishabh Pant’s 101 and another left-hand batsman Washington Sundar’s unbeaten 96 runs knock. Pant was adjudged Man of the Match for his first Test ton on home soil, overall it was his third hundred in this format of the game. Meanwhile, Chennai-lad Ashwin was named Man of the Series for taking 32 wickets and scoring 189 runs with a 31.50 batting average in the four-match Test series. It was eighth time when he was chosen for the Man of the Series. He also scored a hundred at Chennai.

After losing the first match of the series, India made a brilliant comeback to pocket the series 3-1. India had won the second Test by 327 runs, followed by a 10 wickets win in the pink ball D/N Test. The third Test, which was held on the same ground, was finished within two days due to Axar Patel’s performance who took 11 wickets, becoming the first bowler in Test cricket to bag 10 or more wickets in D/N match. The Gujarat-born Axar took 27 wickets to become the highest wicket-taker in the debut series in the longer format of the game. In their second innings, the English team got off to the worst possible start as their first three batsmen failed to reach double digits (Zak Crawley 5, Dom Sibley 3, Jonny Bairstow 0.)

Ben Stokes, who was the highest run-getter for England with his 55 runs knock in the visitors’ first innings, was caught by Virat Kohli off left-arm spinner Axar in the 13th over. He scored 57 runs in both the innings of the match. Ollie Pope, who was not looking comfortable against spin, especially against Ashwin, was stumped by Pant off Axar. Root offered some resistance on the pitch which was helping the spinners, but could not keep the spinners at bay, as he fell to Ashwin for 30 in the form of sixth wicket. He took the review but the ball was hitting his bat first. Therefore, the third umpire did not ask the on-field umpire to change his decision.

In the second session of the third day, England lost 6 wickets for 85 runs. Then, in the last session of the day, Dan Lawrence, who scored his second Test fifty, along with Ben Foakes tried to consolidate the English innings, adding 44 runs for the seventh wicket partnership. But he could not hold the spinners for long as Foakes was caught by Ajinkya Rahane for 13 off Axar in 44the over of the inning. The last three batsmen could add only 25 runs along with Lawrence. The off-break bowler Ashwin cleaned bowled right-handed batsman Lawrence to wrap the England’s second and last innings of the series.

Earlier in the day, India added 71 runs to their overnight score of 294/7. India played 20.4 overs in the first session of the third day. Axar Patel and Washington Sundar were not looking in any trouble and were playing their shorts easily. The duo continued to inflict misery upon England and went on to complete the second consecutive century partnership of the innings (106). England’s batsmen could not make any 50 runs partnership in the match. Axar was run out in the 113th over when he tried to steal a single. In the very next over, Ben Stokes wrapped the Indian innings with Ishant Sharma (0) and Mohammed Siraj’s wickets (0). Sundar missed out on his maiden Test ton by four runs. For England, Stokes took 4 wickets for 89 runs in 27.4 overs, while veteran medium-pacer James Anderson took 3 wickets for 44 runs in 25 overs.

Strategic manufacturing a key driver for propelling the growth of economy: Uday Kotak