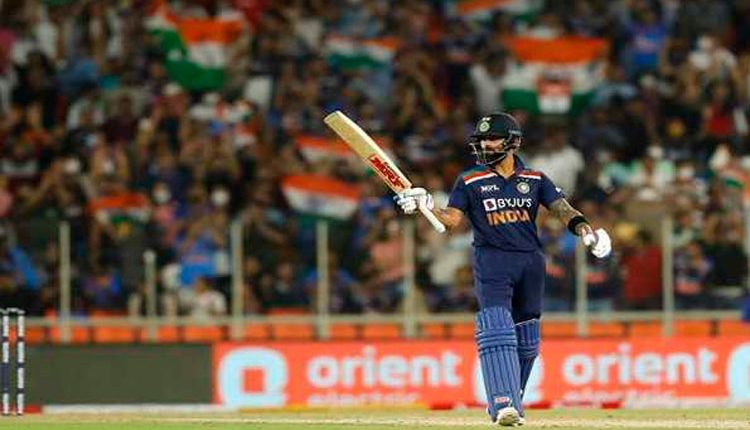 Ahmedabad, Mar 14 (Agency) Riding on fantastic fifties by debutant Ishan Kishan and captain Virat Kohli, India bounced back in style as they thrashed England by 7 wickets in the second T20I, to level the five-match series 1-1, here on Sunday. Sent into bat, England made 164/6 in stipulated 20 overs off the back of opener Jason Roy’s 46 and skipper Eoin Morgan’s made 28 off 20 balls. Washington Sundar (2/29) and Shardul Thakur (2/29) were the pick of the bowlers for India.

Chasing 165 for victory, India lost KL Rahul in the opening over but a 94-run stand between debutant Ishan Kishan (56) and Virat Kohli (73*) set the tone for the victory. In the end, Kohli remained not out and guided India to victory in 17.5 overs. Rishabh Pant also chipped in with handy contribution of 26 off 13. Sam Curran, Chris Jordan and Adil Rashid picked one wicket each for England. During the chase, Kishan also emulated Ajinkya Rahane’s feat by becoming only the second Indian to score a fifty on debut in the shortest format. Rahane had scored 61 on his T20I debut against England in Manchester in 2011 with followed by Kishan’s score.

Kohli meanwhile, became the first Indian cricketer to score 12000 international runs as captain during his innings. When he crossed the 17-run mark, Kohli became only the 3rd captain after Australian great Ricky Ponting and South Africa legend Graeme Smith to breach the 12,000-run mark in international cricket. Earlier, India began well as Bhuvneshwar Kumar got rid of Jos Buttler in the very first over. Jason Roy (46 off 35) and Dawid Malan (24 off 23) then shared 63 runs off 47 balls to take the visitors innings forward. The partnership was broken by Yuzvendra Chahal in the ninth over when he dismissed Malan. Just when Roy was looking dangerous, he got out to Washinton Sundar in the 12th over. Washington struck again in his next over to remove Jonny Bairstow (20). England captain Eoin Morgan (28 off 20), who was in search of big hits, was the next man to get out. He edged a Shardul Thakur slower delivery to Rishabh Pant behind the stumps.

At 130 for four in the 15th over, England looked well in course of a big target but the Indian bowlers Bhuvneshwar Kumar, Shardul Thakur and Hardik Pandya bowled brilliantly to concede just 34 runs in the last five overs.