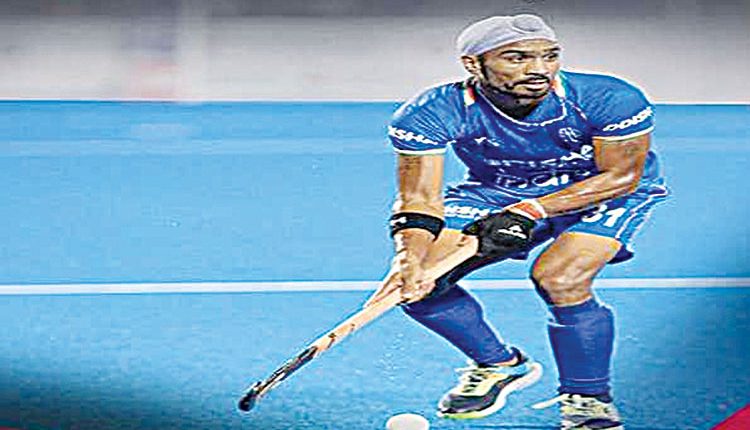 Adelaide, Nov 26 (Representative) The opening match of the Indian men’s hockey team’s tour of Australia went down to the wire, with as many as three goals scored in the last quarter. Eventually, it was the home team Australia who snatched a 5-4 win with a 60+ minute goal by Blake Govers. Both teams lived up to the billing as they produced an electrifying opening match, with as many as nine goals being scored in 60 minutes of entertaining hockey, leaving the weekend spectators on the edge of their seats at the Mate Stadium in Adelaide. For India, experienced forward Akashdeep Singh (10, 27, 59) scored a hat-trick and Harmanpreet Singh (31) too impressed with his penalty corner attack. For the Aussies, Lachlan Sharp (5), Nathan Ephraums (21), Tom Craig (41) and Blake Govers (57, 60+) scored to put their team ahead. As expected, the match began on a rollicking note, with Australia raising the tempo in the very first quarter. The speed with which they attacked showed their intent but India stayed toe-to-toe. Even though Australia picked up the first strike with Lachlan Sharp scoring a scintillating goal set up by Tom Craig in the 5th minute, India stayed composed to find the right moment to score.

Only five minutes later, a good tackle by Dilpreet Singh led to India’s counterattack which was capitalised well with Akashdeep scoring an equalizer. Australia’s second goal too was set up by Tom Craig who dominated the midfield, assisting Ephraums in the 21st minute to put one past India goalkeeper Krishan Pathak, who replaced Sreejesh in the second quarter. Six minutes later, it was Akashdeep Singh leading India’s attack again as he scored another equaliser followed by a penalty corner in the 31st minute which was miraculously converted by Harmanpreet Singh after a slight fumble by Rajkumar Pal who was positioned as the stopper. This goal by India Captain put his team ahead by 3-2 for the first time in the game. Australia bounced back in the third quarter with a goal by Tom Craig in the 41st minute. The last quarter was brilliantly played with Australia coming out in top gear. They pushed India to make errors, leading to a penalty corner awarded in the 57th minute. This was their seventh penalty corner of the match and Blake Govers converted from a fine variation snatching a 4-3 lead. Akashdeep’s heroics though led to India’s fourth goal, leveling the score with just a minute left for final hooter. One would think the match would end in a draw but Australia’s fighting spirit was in the fore again.

Winning a penalty corner with seconds left for the final hooter, Blake scored his second goal, and his team’s fifth which put Australia ahead by 1-0 in the five-match series. “It was a disappointing finish to what was probably a pretty good performance,” expressed India’s Chief Coach Graham Reid. “We let ourselves down at certain stages specifically in two quarters but I think we came back well only to unfortunately hand it back to them (Australia) at the end. That’s something we have to get better at now. “The challenge now is to put a good performance together. One of the objectives of this tour is consistency, and that’s the challenge for us tomorrow,” he asserted. India vs Australia Match 2 – Sunday 27 November (1100hrs IST) Match 3 – Wednesday 30 November (1330 hrs IST) Match 4 – Saturday 3 December (1100hrs IST) Match 5 – Sunday 4 December (1100hrs IST) Matches will be live on Star Sports First, Star Sports Select 1 SD and Star Sports Select 1 HD ok linear TV. Disney + Hotstar will also stream the matches live.