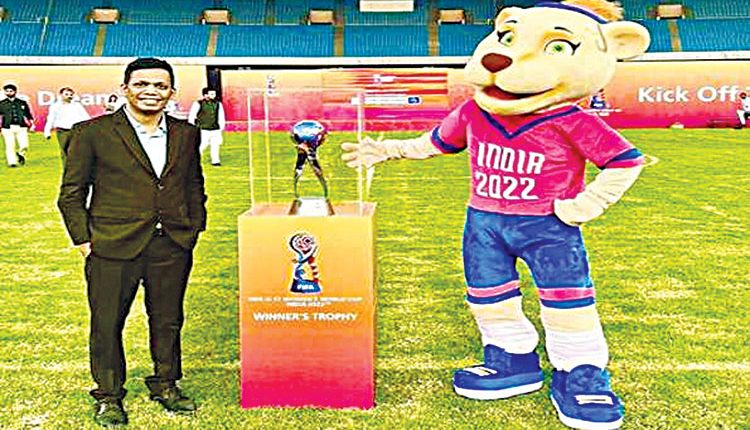 Margao (Goa), Oct 26 (Representative) The Pandit Jawaharlal Nehru Stadium in Margao, Goa, is currently playing host to the largest number of matches in the FIFA U-17 Women’s World Cup, somethingthat is a thing of pride for the entire state. The state of Goa has had a long history in Indian Football, and the state government has left nostone unturned to promote the beautiful game and build a better future for it. “It is a proud moment for us in Goa to be able to host the FIFA U-17 Women’s World Cup. Goa is the venue that is hosting the most number of matches in the World Cup, including two quarter-finals and two semi-finals,” said Dr. Ajay Gaude, Director, Department of Sports and Youth Affairs, and Executive Director, Sports Authority of Goa. “The hybrid turf that we have installed at the Fatorda is one of a kind, and FIFA, after it’s inspection of our venues, said that Goa has the best pitches in India.”

In an effort to popularize football among the younger generation, the Sports Authority of Goa hasalso taken it upon itself to let thousands of schoolchildren into the stadium for every match.“Football is the state sport in Goa. It is in the blood of every Goan, and they follow the game from their childhood to old age. We are all part and parcel of the game,” said Dr. Gaude. “That is why, we have brought at least six thousand kids to the stadium for every match that has been played so far. Sometimes that number has gone up to eight thousand.” The sports director further said that football is an important sport for the State Government as it is through the sport that the overall economy of Goa can also be further improved upon. “It is not only the hosting rights of the World Cup, but also an overall economic growth that we are looking to bring about through the sport. We all know that our state has so many beautiful beaches, and a very welcoming culture. Football is a great means of promoting the tourism industry in Goa, thus further boosting our economy,” he said. Goa has two Arjuna Awardees (both legends of Indian Football) – Brahmanand Sankhwalkar and Bruno Coutinho – and the duo is playing crucial roles for the development of the game at the grassroots level in the state.“We have many footballing legends like Bruno Coutinho and Brahmanand Sankhwalkar.

The likes of Brandon Fernandes, Liston Colaco, Glan Martins and many more are currently playing in the Senior Men’s Team, Michel Castanha and Karishma Shirvoikar are in the Senior Women’s Team, and we’ve also had coaches like Maymol Rocky, and they are all legends who motivate the youngsters in Goa, and by continuation, make our contribution to Indian Football,” said Dr. Gaude. “Football is played in every corner of the sate, whether on turf, soil, or mud. We have several plans for the future development. With quality stadiums like Fatorda, Tilak Maidan, and Bambolim, we also have turf grounds and a Khelo India centre. The Goa Football Council has been placed for the development of football, and Brahmanand Sankhwalkar is its chairman. We have also created 44 centres across the state for grassroots activities for kids ranging between the ages of 10 to 15.”One of the main aims, Dr. Gaude says, is for Goa to reclaim the Santosh Trophy title, something that the state has won five times.“It has been 13 years since Goa has won the Santosh Trophy, and it is our hope that we can be champions again in the coming years. We are also hosting the National Games in 2023, and I’msure the infrastructure we have built here will help the state in the long run.”